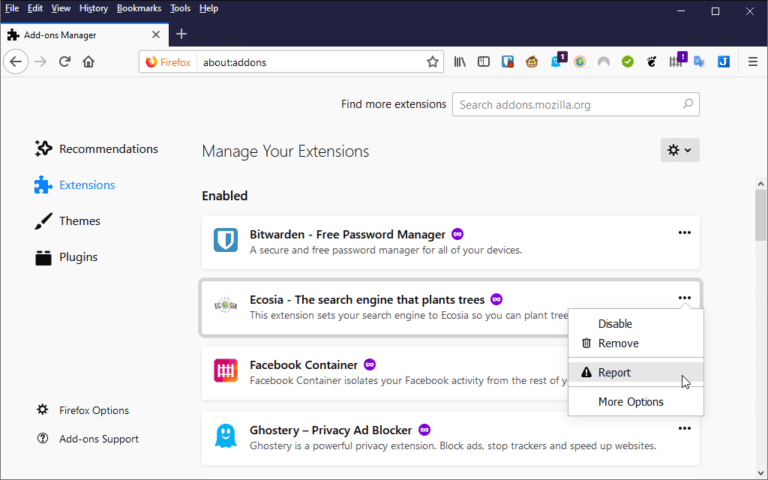 Mozilla has released Firefox Quantum 68.0 for desktop, along with Firefox for Android 68.0 and Firefox ESR 68.0.

The new release promises improvements to extension discovery and security, improves dark mode in reader view, widens its protections against cryptomining and fingerprinting, and adds BITS update support for Windows, allowing Firefox to update even when the main application has been closed

The biggest change in Firefox 68 sees improvements to its extension security and discovery features. When visiting about:addons, users will see the dashboard has been redesigned to provide easier access to information about each add-on, including permissions and release notes.

Users also gain a new feature to report extensions and themes for security or performance issues -- click the … next to an add-on or theme to see a Report option. Users can then choose from eight reasons for why they’re reporting it (including the catch-all 'Something else').

Finally, a new Recommended Extensions program lists a selection of extensions beneath the currently installed set that have been recommended for one reason or other -- each one is displayed with ratings and user count.

Elsewhere, Firefox’s Dark Mode has been further extended in reader view to ensure windows are also dark on the controls, sidebars and toolbars. Users also gain access to their Firefox account settings from the hamburger menu if they wish to move the recently added user button from the main toolbar to the overflow menu.

Cryptomining and fingerprinting protections -- introduced as standalone components in Firefox 67 -- are now enabled by default when Strict is selected under Content Blocking in Options > Privacy & Security.

Windows 10 users gain several improvements: the WebRender GPU acceleration feature is now being rolled out to those PCs with AMD graphics cards, while a Firefox shortcut is automatically added to the Windows 10 taskbar on new installations.

One notable change is Firefox’s added ability to automatically attempt to resolve https errors caused by anti-virus software. This occurs when AV programs intercept download links while not having registered themselves as a valid issuer of the TLS certificates required to authenticate the interception as valid (rather than a man-in-the-middle attack).

Going forward, all camera and microphone access will now only work over https connections. Changes to the custom desktop preferences sync option have also been applied to allow advanced users to have more control over what exactly is synced.

The release also sees Firefox ESR updated to version 68 -- it’s the first major ESR release since version 60 in May 2018 and brings every major feature update and change applied to Firefox from 61 through to 68 to the ESR channel.

Firefox Quantum 68.0 and Firefox ESR 68.0 are both available now as a free, open-source download for supported versions of Windows, Mac and Linux -- note the ESR version will not receive any feature updates from now until the next major ESR release and is aimed primarily at larger organizations (see here for details). Also released is Firefox for Android 68.0 .