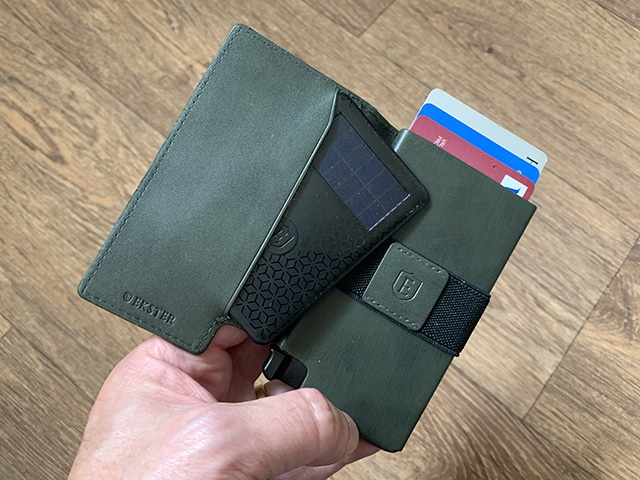 There are three things you likely never leave home without -- your wallet, phone, and keys -- and it could be devastating if you lost any of them, or had them stolen.

Ekster 3.0 launched a couple of days ago and is the world’s first voice-activated smart wallet, with worldwide traceability, quick card access, and RFID protection. You can use your phone to track down the wallet should you lose it, and use the wallet to find your phone if that goes missing. (It can’t help with your keys though, so take good care of those).

I reviewed the Ekster Parliament -- which is a bi-fold wallet made of handcrafted premium leather -- and the (optional) Ekstar Tracker Card 3.0.

The wallet is about the same width as a credit card, and about half an inch taller (the exact dimensions are 0.4 x 4.1 x 2.5 in). On the back is a pocket for cards, and opening it up reveals two more card flaps on the left, and a band for your money on the right side.

The wallet has a clever trick though, and that’s there’s a slot on the top into which you can insert six more cards, and a trigger at the bottom left. When you press this (with the wallet open or closed), the cards pop up for easy access. It’s very cool.

By itself, the Ekster Parliament is a clever wallet which you’ll soon come to love, but it’s the Ekstar Tracker Card which makes it even more useful. This is around the same size as a credit card, just slightly thicker, with a solar panel in the top third, and a button below.

The removable card can be charged just by taking it out of the wallet and leaving it in the light. It doesn’t require direct sunlight to charge and just three hours of light will give it enough power for two months. 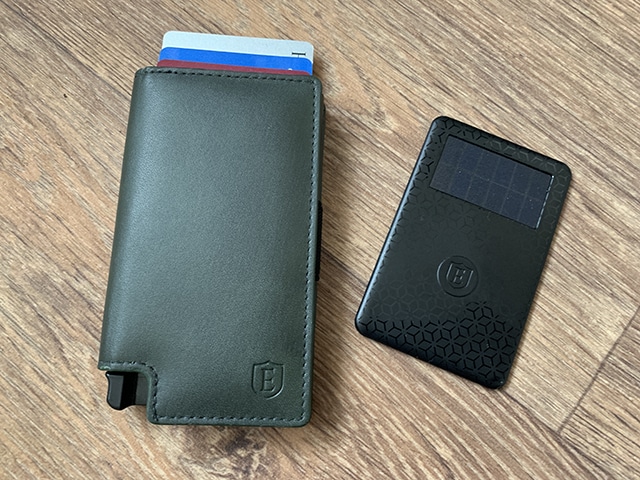 Link it via the Chipolo app, and you can find the card/your wallet by ringing it from your phone. If you have the card, but have misplaced your phone, double-pressing the card’s button will cause your handset to ring. It uses Bluetooth 4.0 which gives it a range of up to 200ft.

But what if you lose your wallet or phone away from where you are? If you’re not within range to hear either ring, you can find both devices on a map.

The card uses a worldwide crowd GPS tracker network so when any Chipolo user is in range of it you’ll receive a GPS update of its location.

Each card has a QR code on the back, and if someone scans this a message will be sent to you letting you know where it is (provided you've registered it and they enter an email address).

Not only that, but it works with Google Assistant, Amazon Alexa and Siri, so you can simply ask your choice of personal assistant where your wallet or phone is, and it can either ring the device for you, or tell you where it was last seen. Or at least in theory. Chipolo, via my Echo, only sometimes recognizes the name of my wallet (I've renamed it a couple of times but that hasn't helped), and when it does start it ringing it often ignores my requests to stop it afterwards. If I ask Echo where my wallet is, the command isn't recognized and then it stops listening to me. Hopefully these are just teething problems and it gets better.

The tracker can also be used as a selfie remote too because, well, why not?

The wallet is available in a choice of seven colors -- Classic Brown, Nappa Black, Steel Blue, Roma Cognac, Merlot Red, Juniper Green (the one I have), and Blush Beige -- and costs $79. The tracker card costs $49, but you can currently get it for $29 (40 percent off), meaning the card and tracker combination will set you back $108.

Like all good modern wallets, the Ekster Parliament offers RFID protection to protect your cards from wireless skimming.

I’ve always carried a fairly standard squarish wallet, so switching to the Parliament did take a little getting used to, but now I can’t imagine switching back. The card slider is excellent, and I’ve made real-world use of the tracker twice now, although not through Alexa.

If you’re in the market for a new wallet, then I can definitely recommend the Ekster Parliament 3.0 (with the tracker card).

You can buy it here and it comes with free US shipping and returns.