Android tablets have fallen out of favor with consumers, and that's sad. Things have gotten so bad for this device type that Google -- the maker of Android -- has even pulled the plug on making them. Yikes! That is as ominous as it gets, folks. Why did this happen? Well, I blame the influx of cheap no-name tablets from China that crowded the market. Not to mention, smartphones started getting ridiculously large, making tablets a bit redundant. Ultimately, Android tablets became synonymous with crap. With the exception of Samsung and Huawei, quality tablets running Google's mobile OS have been few and far between.

Today, Samsung announces its latest Android tablet, and you know what? It is actually very exciting. Called "Galaxy Tab S6," it is just 5.7mm thin and has a 10.5-inch Super AMOLED screen. The device is outfitted with some really cool technology too. For instance, it has an in-display fingerprint reader and a dual-camera setup on the rear -- one of the lenses is "ultra wide." It features an octa-core processor with either 6GB or 8GB of RAM -- depending on configuration. Storage is either 128GB or 256GB, and yes, you can increase that using micro SD. The super-cool DeX feature, which can essentially transform the tablet into a desktop/laptop experience, is also included.

"A new-and-improved version of Samsung DeX is also packed into the Galaxy Tab S6, enabling you to seamlessly transition to a PC-like experience, so you can easily multitask and optimize your viewing experience. With a DeX function key added to the Galaxy Tab S6's new dedicated Book Cover Keyboard, you can launch and close DeX with the tap of a key. The keyboard has been fine-tuned for better functionality, including an S Pen holder, free angle stand, touch pad and new function keys," says Samsung.

The manufacturer's famous S-Pen comes included and the company talks up its functionality below.

Now with remote control functionality and wireless charging capabilities, S Pen on Galaxy Tab S6 puts even more power and control in users’ hands. With built-in BLE remote control features1 including a gesture function called S Pen Air actions, S Pen lets you intuitively take selfies and videos, or control the multimedia content you create even when the tablet is not in your hands. Plus, S Pen features wireless charging that delivers up to 10 hours of battery life after just ten minutes’ charge time.

Galaxy Tab S6 makes taking notes with S Pen a breeze. Handwritten Samsung Notes can be converted to digital text and exported to formats like Microsoft Word with just one click. You can also jot down quick notes or sketches while watching a video on the same screen by adjusting the Samsung Notes’ window transparency—perfect for effortless multitasking. 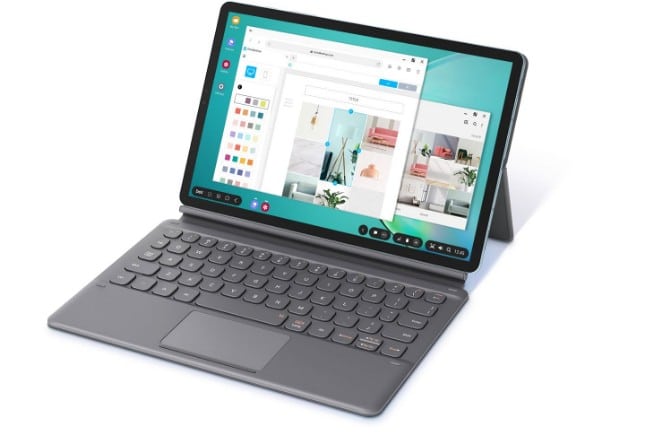 The Samsung Galaxy Tab S6 will become available on August 23, meaning you won't have to wait long. However, pricing is a bit high, with the tablet starting at $650. Want that fancy keyboard case that turns it into a laptop? Yeah, that will be another $180. As you can see, things add up pretty quickly. With that said, if you want a high-quality Android tablet experience, your choices are limited -- you will have to pay up.