Hearing voices? Your smoke detector may be spying on you! 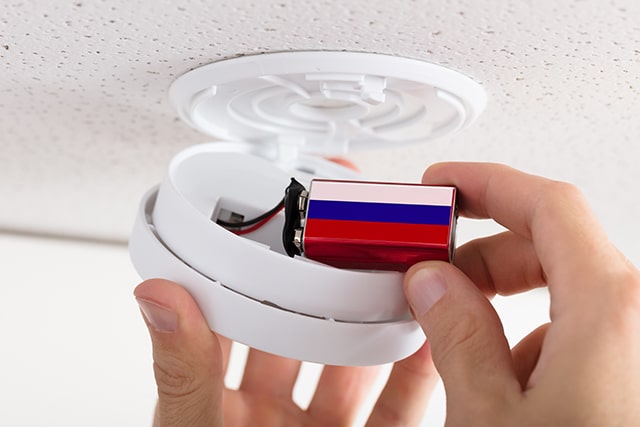 Ever since I installed one of those wireless "home automation kits," my house has been acting like it’s possessed. My lights dim randomly. My thermostat changes temperature settings on its own. And my digital door lock keeps "forgetting" I live here, prompting me to fumble for my keys (it always seems to be raining when this happens).

Just yesterday I came home to find my so-called "Smart TV" had somehow turned itself on and was streaming some weird foreign language content (the source it chose was "RT" -- or something like that). I changed the channel to "CNN" and went to the kitchen to make a snack. However, just as I began slicing open a fresh baguette, I heard that same foreign language stream playing. I then rushed back to the living room only to find the TV still tuned to "CNN."

I remember thinking, "Maybe they had run a segment with a non-English-speaking guest?" But I could have sworn it was that other broadcast again. Bizarre.

SEE ALSO: Don't you touch my Lappy! -- 'True' confessions of a PC anti-vaxxer

Even my fancy new connected refrigerator -- the one with an LCD panel on the front so you can "see inside" without opening the door -- has gotten in on the act. The other day I found the screen covered in what I can only describe as "gibberish." It was clearly some kind of coding but mixed with a bunch of characters and symbols I didn’t recognize (I showed a snapshot of the screen to a professor friend of mine and he told me the unidentified text was from the "Cyrillic alphabet").

But it gets worse. Lately I’ve been hearing…voices. Whispered voices. Communicating in hushed tones, in a language I don’t understand. They tend to start late at night, when I’m already in bed. Sometimes I hear them arguing, and though I don’t know what they’re saying, I can tell that they’re reacting to me. For example, if I turn on the light, I swear I can hear one of the voices "hushing" the other ones.

Theses whispers in my bedroom seem to be emanating from my new combination smoke and carbon monoxide detector -- though, when I grab a chair and climb up to get a closer listen, they stop. Other times, they seem to come from that damned "haunted" TV of mine (usually when I’m trying to nap on my living room couch, with the TV turned off).

Needless to say, the stress of my home situation is beginning to take a toll on my mental health. At first, I shrugged it all off as just a bunch of random bugs -- the cost of living on the "bleeding edge." But now I’m convinced that these various "smart" devices are in fact conspiring against me.

For example, this morning I received an alert on my phone as I was out walking my dog: My refrigerator had reported a strange "voltage issue," and now my house was "on fire" and my TV was "melting." But I could see my home from where I was standing -- no smoke, no flames, and when I got back from my walk, I found the house was perfectly fine (though I did end up fumbling for my keys again because of that damned, buggy lock).

Am I losing my mind? Can all of these "smart" device malfunctions be a coincidence? I mean, it’s not like some state-sponsored hacking group is going around the internet taking over connected devices and using them to spy (or worse) on their owners? That’s just crazy talk, right? Right?

14 Responses to Hearing voices? Your smoke detector may be spying on you!