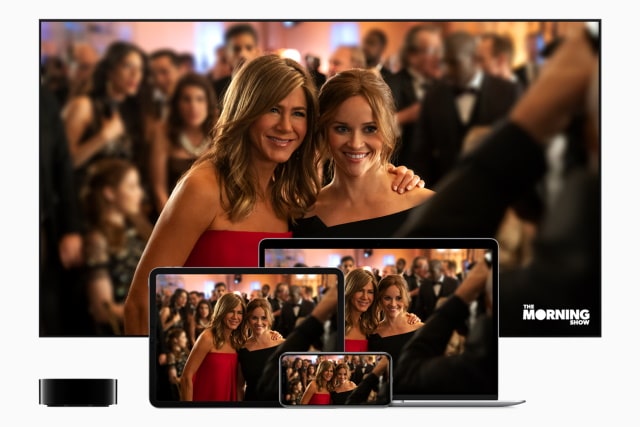 Apple is launching its new streaming video service, Apple TV+, on November 1. Like Apple Arcade, Apple TV+ can be shared with up to six family members, and will cost $4.99 per month -- although you may be able to get it for free.

The service is priced to undercut other big streaming subscriptions and while there is unsurprising support for Apple's iPhone, iPad and Mac devices, Apple TV+ will also be available on smart TVs, media devices, and even online in Safari, Chrome and Firefox.

There is a seven-day free trial of Apple TV+ service available, and Apple says that anyone buying an iPhone, iPad, Apple TV, iPod touch or Mac will be given one year of the service for free. Apple TV+ will be available in over a hundred countries, and will feature a range of original shows. Titles that have been named so far include The Morning Show, Dickinson, See, For All Mankind and The Elephant Queen.

Subscribers can watch Apple TV+ originals both online and offline, ad-free and on demand, on the Apple TV app, which comes pre-installed on iPhone, iPad, Apple TV and iPod touch and will soon be on Mac with macOS Catalina. The Apple TV app is also available on select Samsung smart TVs, and will come to Amazon Fire TV, LG, Roku, Sony and VIZIO platforms in the future. Customers can also sign up and watch Apple TV+ originals on the web at tv.apple.com.

Apple has shared details and trailers for a number of these shows and says that new original content will be added each month. If you have an Apple device with the Apple TV+ app installed, you can already watch these trailers and sign up for notifications about new episodes. The Apple TV+ website, tv.apple.com, can also be used to see what's coming up.