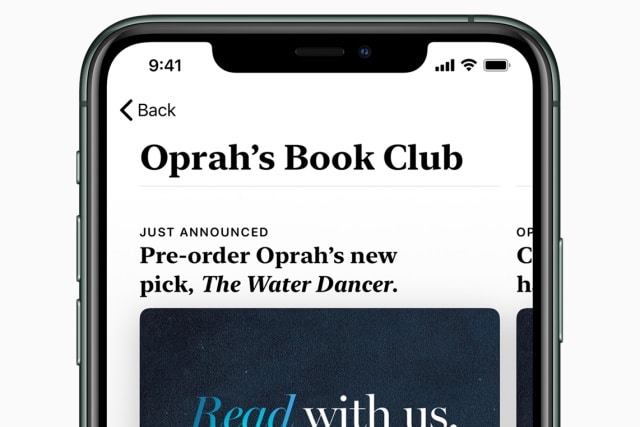 Oprah Winfrey has teamed up with Apple to launch her famous Oprah's Book Club in Apple Books. Her first selection is Ta-Nehisi Coates' The Water Dancer.

As well as bringing her recommendations to the Apple Books app, Oprah also has a series starting on Apple TV+ in November. New episodes are scheduled to be released every two months, and the first one -- which debuts on November 1 -- features an interview with Coates.

For every sale from Oprah's Book Club, Apple says that it will make a contribution to the American Library Association. This is an initiative that supports local libraries and fund programs that give book access to everyone. The Water Dancer will be available from tomorrow, September 24, in audio and ebook formats.

Oprah shared the news with her 42 million followers on Twitter:

The only thing more thrilling than being captivated by a book is being able to share it with others. Which is why I’m excited to bring @oprahsbookclub to @apple starting TODAY! My first pick, The Water Dancer by the brilliant Ta-Nehisi Coates. It will enthrall you. #ReadwithUs pic.twitter.com/DG99kTKrWu

I am who I am today because of the experience of learning to read at an early age. Reading opened up a whole world for me beyond the red dirt road and my grandmother's porch in Mississippi. I want to do that for everybody. And the opportunity to do this with Apple, to speak to people all over the world about the pleasures, the excitement, the tension, the drama that a good book can bring you … I don't know what’s better than that.

Apple says it is keen for people to make reading a daily habit, something it aims to promote with the Reading Goals feature in Apple Books.