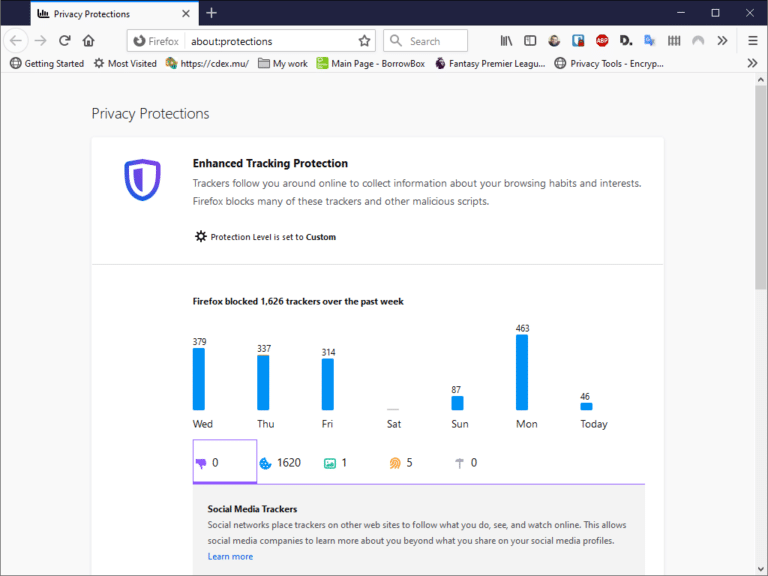 Despite the landmark version number, Firefox 70’s most visible change is a refreshed icon and new welcome screen. Better support for your OS’s system dark mode is also unveiled, while Enhanced Tracking Protection (ETP) has now been made the default for all platforms and users.

Firefox 70 opens by making the social tracking protection component a standard feature of its ETP system. This component provides protection against cross-site tracking from the likes of Facebook, Twitter and LinkedIn.

In addition, a new privacy report -- accessible by selecting 'Privacy Protections' from the main Firefox menu -- has been added. This provides a summary of your current protection level, and shows a chart of how many trackers have been blocked on a daily basis over the past week (divided into the five categories of protections offered under ETP).

The report also ties in information from two newly updated components: Firefox Lockwise, a cross-platform password management tool to rival the likes of Bitwarden and LastPass, and Firefox Monitor. Lockwise now shows alerts about potentially vulnerable passwords that have been exposed in data breaches -- users can disable this via 'Options > Privacy & Security' under 'Logins and Passwords'.

Firefox 70 also debuts a new message panel with the latest news and features, accessible via the gift box icon in the Address bar. This only appears when new information has been released -- otherwise it can be accessed via Firefox’s main menu under 'What’s New'.

Other enhancements in the Address bar is an icon alerting you whenever a website is using your geolocation, along with the addition of shortcuts to Firefox Monitor and Firefox Send to the standalone Firefox account menu.

Firefox’s core engine components have also been overhauled with the promise of better performance -- these include a faster Javascript Baseline Interpreter, a wider rollout of the WebRender graphics rendering engine for Windows and compositor improvements to macOS that reduce power consumption, speed up page loading by up to 22 percent and reduce video resource usage by up to 37 percent.

Firefox’s built-in pages such as Preferences and the new Privacy Protections report now follow the system dark mode preference, while macOS users now gain the ability to import passwords from the Chrome browser. Developers also gain a string of changes and improvements including more audits in the Developer Tools Accessibility Panel.

In the ESR channel there’s a release for Firefox for Android 68.2, which adds an option to sign into your Firefox account via the onboarding experience. A crash on the Welcome screen has also been resolved.

Firefox 70.0 and Firefox ESR 68.2.0 are available now as free, open-source downloads for supported versions of Windows, Mac and Linux. Also released is Firefox for Android 68.2, along with its eventual successor, Firefox Preview 2.2.0.