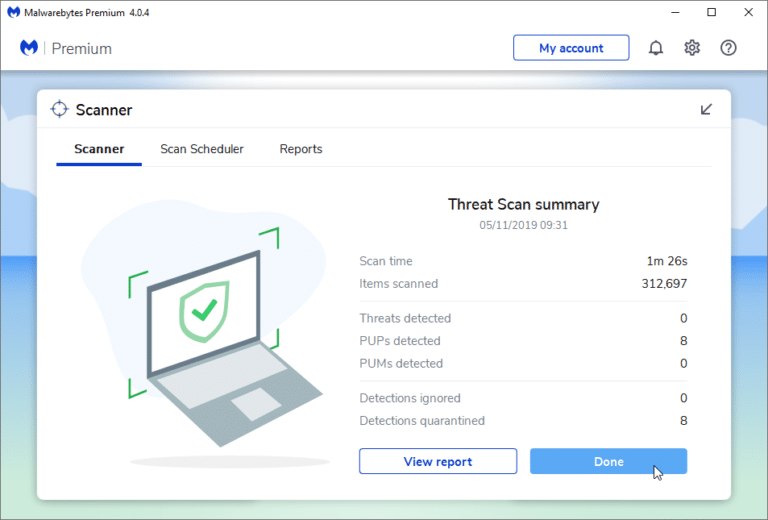 Malwarebytes has released a major new version of its eponymous anti-malware tool: Malwarebytes 4.0 is available now as a free and premium version for both Windows and Mac.

The new version unveils a major redesign with a look towards the minimalist. This reflects the promise of a much smaller footprint -- 50 percent less impact on the CPU during scans -- and associated performance gains. Malwarebytes 4.0 also unveils a brand new detection engine.

The new detection engine is called Katana. It uses "patented, dynamic methods" to improve detection of zero-hour threats. The threat definition process has also been streamlined with the aforementioned 50 percent reduction of CPU time accompanied by faster scans.

The engine comes with upgraded behavioral detection capabilities, designed to trap a wider range of threats including those using signature evasion techniques.

The new approach is reflected by another major change: a completely redesigned user interface. This comes with the promise of being more informative, intuitive and simpler to navigate. Key controls are front and center as before, and there’s a direct link to the Malwarebytes blog, promising to help users stay fully up to date with the latest cybersecurity developments.

Of more practical use is a link for each threat that goes straight to the Malwarebytes online Threat Center, giving users more information about the threats (from malicious to potentially unwanted) that have been detected.

As with previous releases, the free version of the software provides scan-and-remove capabilities only. Users can upgrade to the Premium version to add real-time protection.

Recent malware detection studies have shown Malwarebytes has struggled to keep pace with rival products when used as a standalone product, but one of its main advantages is the fact it’s designed to run alongside other anti-malware tools, providing a secondary layer of protection. It will be interesting to see how the new detection engine fares in the next round of tests provided by the likes of AVTest.