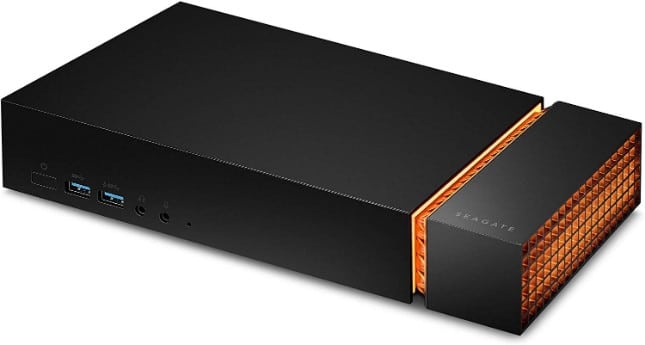 PC gamers used to turn their noses up at laptops, as they weren't capable of playing top-tier games. While most gamers still prefer desktops -- which are more powerful -- there are notebooks that are capable of running modern PC games. Thanks to Thunderbolt 3, laptop owners can even expand their machines with high-end devices, such as PCIe-based storage and even graphics cards.

Today, Seagate unveils two new products that laptop gamers will want to keep an eye on -- the FireCuda Thunderbolt 3 Gaming Dock and FireCuda 520 PCIe 4.0 SSD. What is a gaming dock? Well, it is your typical TB3 docking station, but also, it houses a 4TB HDD for storing your games. It even features adjustable RGB lighting -- something many gamers love. As an added bonus, it also has a PCIe NVMe M.2 SSD expansion slot, but it is only Gen3.

The FireCuda 520 SSD is blazing fast since it is PCIe 4.0, and it can be used in both gaming laptops or desktops. Keep in mind, however, machines with M.2 slots that are PCIe 3.0 or below will not get to experience the top speeds. Your computer must have PCIe 4.0 to achieve the promised 5000MB/s read and 4400MB/s write.

"With sequential read-write speeds of up to 45 percent faster than PCIe Gen3 NVMe drives, the FireCuda 520 delivers an extreme boost in performance for PC gamers looking for the edge. The M.2 2280 SSD is available in 500GB, 1TB or 2TB capacities and compatible with the new AMD X570 chipset and third-generation AMD Ryzen Desktop Processors. It features plug-and-play compatibility with PCIe Gen4 motherboards delivering an extreme boost in performance as well as backward compatibility with PCIe Gen3 devices. The FireCuda 520 offers a five-year limited warranty and includes the Seagate’s SeaTools software that monitors health, tracks performance, and keeps you up to date on firmware updates," says Seagate.