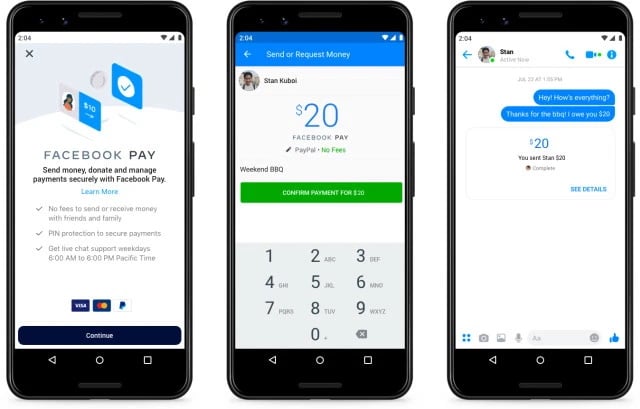 Facebook has launched a new payment service that can be used to send money and buy goods and services from within its apps -- and it's nothing to do with Libra.

The service is called Facebook Pay; it's available in the US for now, but it will expand into more countries in due course. The service allows for payments to be made in Facebook, Facebook Messenger, WhatsApp and Instagram. Given the social network's reputation for privacy, it remains to be seen whether people trust it as much as the likes of Google Pay and Apple Pay.

To use Facebook Pay, you'll need to link to a payment source, and Facebook says that there's support for PayPal as well as "most major credit and debit cards". The company stresses that the system is built on top of financial infrastructure and partnerships, and is entirely separate from the Calibra wallet which will run on the Libra network.

Facebook Pay will begin rolling out on Facebook and Messenger this week in the US for fundraisers, in-game purchases, event tickets, person-to-person payments on Messenger and purchases from select Pages and businesses on Facebook Marketplace. And over time, we plan to bring Facebook Pay to more people and places, including for use across Instagram and WhatsApp.

All payment services come with their own set of privacy and security concerns, and this is certainly the case with anything coming from the Facebook stables. The company says that all financial details are securely stored in encrypted form, and there is an anti-fraud system in place that monitors for unusual or suspicious activity. For peace of mind, users can add an extra layer of security by enabling PIN-protection or finger/facial recognition for payment authorization.