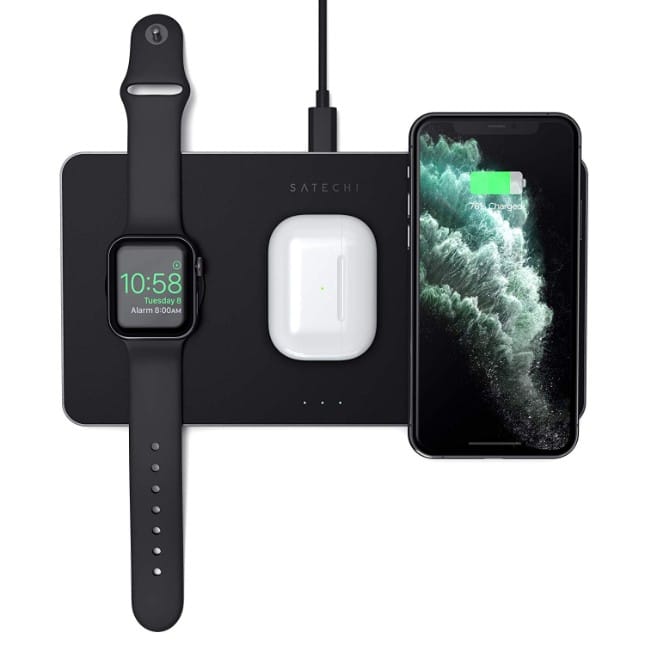 Remember the Apple AirPower? If not, that is totally understandable. After all, the product never actually saw release. Please know, it was Apple's planned Qi wireless charging mat that could charge multiple devices at once. For whatever reason, the iPhone-maker canceled the product before it reached the public, saying it was not up to Apple's quality standards.

Impressively, popular accessory-maker Satechi has managed to do what Apple couldn't. You see, today, Satechi releases the Trio Wireless Charging Pad, which is capable of charging your iPhone, Apple Watch, and AirPods at the same time. This is with a single USB-C cable. Wow. Of course, since it uses the Qi wireless charging standard, it can charge non-Apple devices too, such as an Android phone.

ALSO READ: Own an Apple Watch? You need to check out this clever new USB-C charger from Satechi

The company further says, "Ideal for users on-the-go, the sleek and modern pad is smartphone case friendly (up to 5 mm) – just place and charge or grab and go. Additionally, the charging pad supports Apple Watch in Nightstand mode for full functionality when the charging pad is bedside. Satechi has crafted the Trio Wireless Charging Pad with safety features to give users peace of mind. The charging pad comes equipped with foreign object detection (FOD) and over temperature protection to automatically detect issues and cut power as necessary."

The Satechi Trio Wireless Charging Pad can be had immediately here. It is a bit pricey at $119.99, but since it essentially serves as three wireless chargers, that isn't unreasonable. Actually, you can save $20 by using code STCES2020 at checkout. You should act fast, however, as the coupon expires on 1/10/2020.