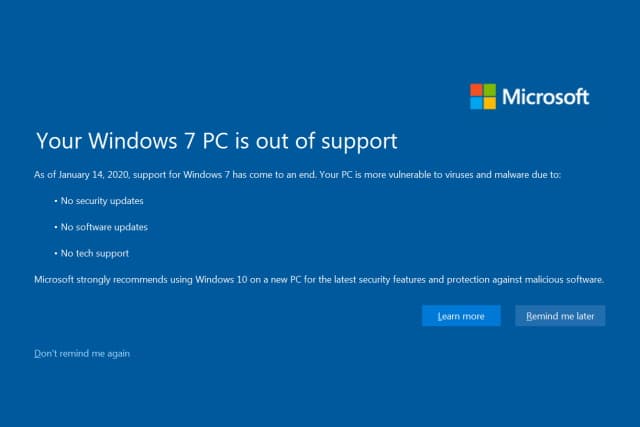 It can hardly have escaped your attention that yesterday was the day Microsoft stopped supporting Windows 7.

To make sure anyone who was unaware is alerted to the fact that no more security updates will be available, full-screen warnings are now being displayed. Microsoft had previously advised Windows 7 users that this message would appear, and as of today the company is making good on its promise.

The message is delivered thanks to the installation of the EOSNotify tool added in KB4530734 back in December, and it urges hangers-on to upgrade to Windows 10. Not many people will be able to reasonably claim that they have not been warned about the end of support.

The message warns anyone who has decided to stick with Windows 7 that it is not really safe to keep using the operating system:

Your Windows 7 PC is out of support

As of January 14, 2020, support for Windows 7 has come to an end. Your PC is more vulnerable to viruses and malware due to:

You have the option of displaying the message again at a later time, but you can also choose to never have it displayed again -- which is the course of action most Windows 7 fans are likely to take.