Have you ever known someone with a smelly car? Of course you have. We have all experienced a terrible aroma coming from a friend or family member's vehicle at some point in time. I have gotten into many a stank NYC taxi cab in my lifetime. Hell, maybe it is your car that stinks! These terrible odors can come from many places too. For instance, the driver could have forgotten to apply deodorant to his/her armpits, there may be 20 empty White Castle burger boxes in the back seat, or worst of all, the car's owner may be a cigarette smoker -- yuck!

What is to be done about a car that smells so horrific? Well, many people buy air fresheners for their vehicle, such as those iconic cardboard trees that hang from the rear view mirror. For the most part, they work -- by masking odors, at least. Let's be honest though, those things just look tacky and trashy. They also signal to the world that you may have an odor problem.

Thankfully, SCOSCHE has released some new products that will discreetly freshen the air in your car while also holding up your smartphone. Called "MagicMount Fresché," this line of automobile vent mounts for smartphones not only smell good and look cool, but they are functional and affordable too. The mounts attach to one of your car's air vents, and then your smartphone is held up by the mount. This can be a great way to decrease distracted driving.

You can replace the scent cartridge when it loses its potency (after 30 days) or even sooner if you just want to change things up. There are eight scents from which to choose -- New Car, Leather, Peppermint, Vanilla, Lemon, Cherry, Tropical and Pine. You can see the Fresché mount styles and refill cartridges below. 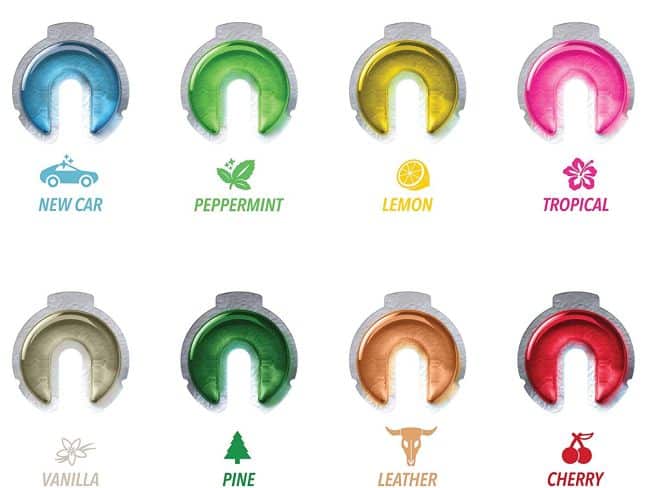 These MagicMount Fresché mounts and scent packs can be ordered from Amazon here now. Pricing for Fresche smartphone vent mounts start at $19.99, while the scent refill cartridges are $8.99 for a two-pack.