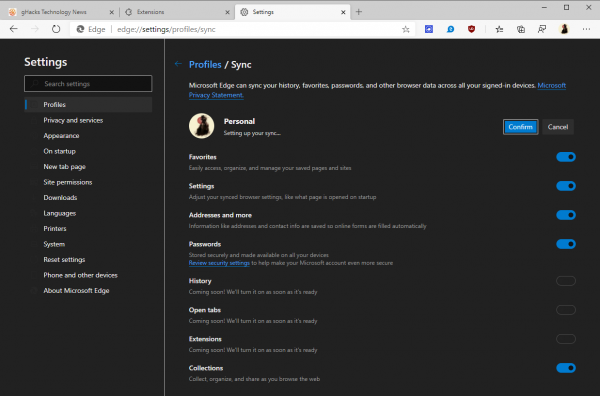 Microsoft started the rollout of the feature in the latest Microsoft Edge Canary version, currently at version 82.0.425.0. While it is not available for all Canary users yet, it is expected that the number will increase in the coming weeks and that the options will be pushed to the Beta and Stable channels of Microsoft Edge eventually.

The initial version was launched with limited synchronization support; Microsoft Edge users may synchronize the favorites, settings, form data (such as addresses or contact information), and passwords.

Features such as the synchronization of the browsing history, open tabs, extensions, or the Edge-specific feature Collections are not supported yet in stable versions. The sync configuration page lists these already however as "coming soon" and Microsoft promises to turn the new feature on "as soon as it is ready".

At least two of the listed sync options that are not yet available, Extensions and Collections, are rolled out currently in the latest Canary build. Edge users may check support by opening the Sync configuration page in the browser; load edge://settings/profiles/sync in the address bar to open the configuration page. Note that synchronization needs to be turned on first by signing in with a Microsoft Account to get options to customize data synchronization between devices.

All it takes then is to toggle the Extensions and Collections setting on the page to enable data synchronization. The options can be turned off at any time again on the same page.

A Microsoft Account is required to sync the data. Synced extensions become available in all Edge instances the user is signed in with the same account, and the same is true for Collections.

The process of setting up synchronization in Edge is comfortable on Windows 10 devices that users sign-in with Microsoft Accounts as it takes a single click to use that account for the syncing. It is possible, however, to use a different account to sync data between different Edge instances.

Microsoft has not revealed when the new sync options will become available in Beta or Stable versions of Microsoft Edge.