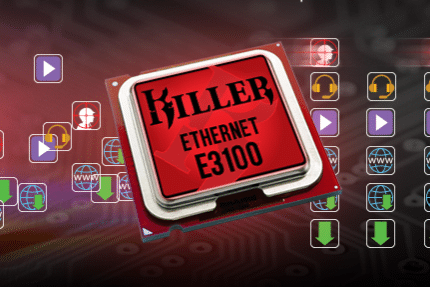 If you've purchased a gaming PC or motherboard lately, there's a very good chance it has a Killer Ethernet controller by Rivet Networks. These controllers are supposed to provide better performance for gaming thanks to Killer's software for Windows that prioritizes gaming traffic. Some swear by Killer's technology, while others call it snake oil.

Today, Rivet Networks announces its latest such Killer Ethernet controller for gaming. Called "E3100," it provides 2.5 Gbps performance, more than double that of gigabit. True, 2.5 Gbps networks are still fairly rare -- especially in homes -- but its popularity is growing. Some people prefer 2.5 Gbps to 10 Gbps , as the former can use existing cabling.

"Delivering more performance while using less power, the E3100 is Killer’s second-generation Ethernet controller that achieves speeds up to 2.5 Gbps. High-performance routers are rapidly moving to support 2.5 Gbps Ethernet, so the Killer E3100 is perfect for gamers who want to take advantage of faster speeds to win more and get the most out of their online experience," says Rivet Networks.

The company further says, "The E3100 continues Rivet’s push to both prioritize critical PC network traffic AND to optimize traffic based on other parts of the network. The E3100 introduces Extreme Gaming Mode which automatically detects when the network is congested and optimizes the PC’s traffic accordingly to maintain a great gaming experience."

Michael Cubbage, CEO of Rivet Networks, provides the below statement.

The industry is accelerating the transition to 2.5 Gbps Ethernet. Gamers that demand the best need the Killer E3100 to get the lowest latency and incredible throughput. With more and more routers and switches hitting the market supporting 2.5 Gbps Ethernet, it is the perfect time for Gamers to upgrade.

Rivet Networks will be providing three variants of this new Killer controller -- E3100, E3100G, and E3100X. You can expect to see them on motherboards and pre-built gaming systems very soon. Rivet Networks specifically names MSI and Acer as partners.