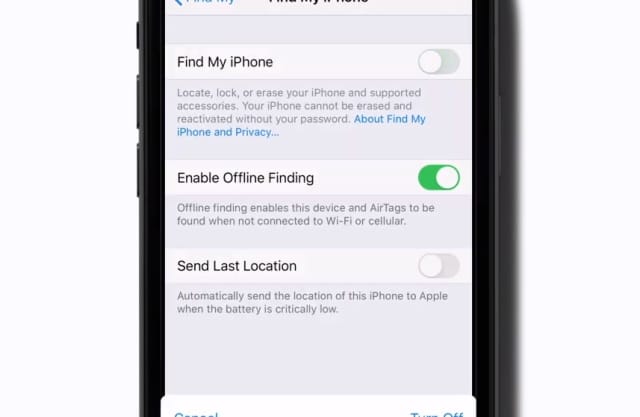 Heads are likely to be rolling at Apple after details emerged online about its unreleased AirTags. A video that references the tracking tags appeared on Apple's official Support account on YouTube but it was removed after the company seemingly realized its mistake.

The revelation came in a video tutorial about how to erase data from an iPhone. In the footage, a screen can be seen which makes reference to AirTags under an Enable Offline Finding heading.

While the tutorial made no direct reference to the AirTags hardware, in the latter half of the video a setting description that refers to them is clear for all to see. As reported by Appleosophy, the Enable Offline Finding setting has the description: "Offline finding enables this device and AirTags to be found when not connected to Wi-Fi or cellular".

This is not the first time we've seen references to this unreleased product. An internal build of iOS 13 included mentions of the tracking tiles which are designed to be attached to valuable items so their location can be tracked if they are mislaid.

Although Apple has said nothing about the devices, they have been rumored for some time, and there has been increasing evidence of their existence and how they will work. It's not known quite when AirTags will be released, but the fact that they are appearing in videos -- intentionally or not --   implies that their release is not too far off.