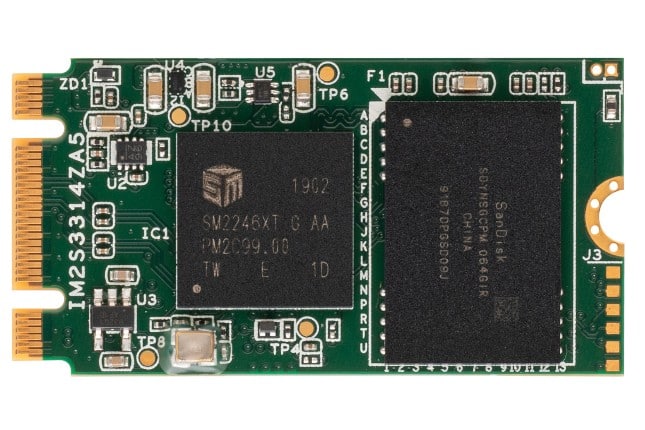 Solid state drives are great for home consumers and PC enthusiasts, but that is not the extent of their usefulness. Actually, the improved performance of SSDs over mechanical hard disk drives is beneficial for business use too. In particular, industrial applications can benefit from the fact that SSDs have no moving parts, making them less likely to fail from hardcore vibration or excessive jostling.

Today, ADATA launches an all-new industrial-grade SSD. Called "IM2S3314," it uses the diminutive M.2 2242 form factor and the SATA 3 interface. The drive can be had in several capacities ranging from 16GB to 256GB, with two memory types -- MLC (multi-level cell) and A+ SLC (single-level cell). But wait, what is this "A+" variant of SLC? ADATA explains that its proprietary A+ SLC technology, "utilizes custom NAND Flash firmware with an A+ sorting algorithm to emulate SLC performance." And now you know!

"For reliable use in most environments, the SSD can operate optimally in a wide range of temperatures, from -40°C to 85°C. As with all ADATA industrial-grade SSDs, the IM2S3314 has a 3K P/E cycles rating, enhancing its endurance, reliability, and stability. All these characteristics and capabilities make the IM2S3314 perfect for a wide range of applications, devices, and segments that require a compact SSD with excellent reliability and stability, such as thin clients, industrial PCs, industrial robots, autonomous vehicles, transportation, healthcare, aerospace, and more," says ADATA.

The company further says, "The IM2S3314 is built with high-quality WD (SanDisk) ICs and comes in a variety of capacities, from 16GB-128GB for A+ SLC and 32GB-256GB for MLC. The IM2S3314 uses the SATA 6.0 Gbps interface and is equipped with a powerful controller with continuous read and write speeds of up to 540/450MB per second. For added stability and reliability the SSD supports a number of technologies including Self-Monitoring, Analysis and Reporting Technology (S.M.A.R.T.), which can indicate a possible imminent drive failure, and NCQ and Windows TRIM Command to boost performance. For data accuracy and security the IM2S3314 also comes with BCH error correcting code technology."

If you are a buyer or decision-maker in a company with industrial needs, and you want to place an order for the IM2S3314, you should contact ADATA directly. The company can be reached here. Pricing is not disclosed, but will likely vary based on quantity ordered.