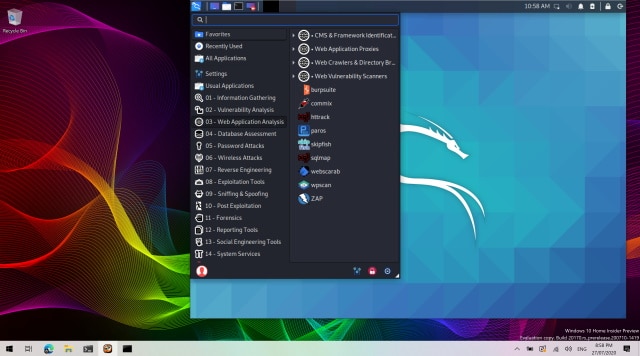 When Microsoft updated Windows Subsystem for Linux to version 2, there was a lot for developers to take advantage of.

Among those making good use of the fact that a genuine Linux kernel is now virtualized in WLS 2 is the team behind Kali Linux. They have created a new package called Win-KeX that gives the distro a graphic desktop environment, and it comes alongside the release of Kali Linux 2020.3.

Writing about the release, the Kali Linux team says: "Having Kali Linux on Windows Subsystem for Linux (WSL) is something we have been taking advantage of since it came out. With the release of WSLv2, the overall functionality and user experience improved dramatically.

The team goes on to say:

Today, the experience is improving once more with the introduction of Win-KeX (Windows + Kali Desktop EXperience). After installing it, typing in kex, or clicking on the button, Win-KeX will give you a persistent-session GUI.

It's easy to get started; just grab Kali Linux from the Microsoft Store and then grab the necessary updates with the following commands:

You can then use the following command to install Win-KeX: