Microsoft: The future is in fashionable PCs

This year at CES, almost every booth has a section dedicated to devices designed with aesthetics in mind. Microsoft has become a big proponent of this new fashion-device movement with a dedicated team working with OEMs to develop fashionable hardware.

At any Starbucks, it's not uncommon to see people with their laptops finishing homework, or catching up on e-mails. As it leaves the confines of the office or home, the computer is no longer just a utilitarian device, and now makes a statement about its owner.

The goal of mavens in the fashion industry is to discover the next big thing before anyone else. At a typical trade show, interesting materials and designs drive the demand of a product. Innovations in technology, however, have long been aimed at the die-hard computer fan who favors faster performance over slick design.

Typical consumers simply purchased their devices out of necessity, but the scales are beginning to tip with demand growing for hardware that performs well, but looks good at the same time. As the form factor of computers evolve to be more attractive, they are transitioning from being the eyesore in the bedroom to the centerpiece of the living room.

Microsoft has recognized the marketing shift, and has sectioned off a team dedicated to working with OEMs to develop fashionable hardware. One of the company's contributions to these manufacturers includes a kind of "design API." Palettes of the Windows Vista colors, material and form factor suggestions are provided to help create a seamless interaction between hardware and software.

When asked if Microsoft has plans to enter the fashion hardware market itself, Nadine Kano, Director of Experience Marketing for Microsoft's OEM team, said the company sees no value in competing with OEMs at this time, but that reference designs are often delivered to manufacturers to be used as a guideline.

She added that the marketing strategy for attractive devices will be an integral part of Microsoft's advertising campaign this year.

Manufacturers like Sony, ASUS, Lenovo and Gateway have realized the demand for pretty PCs as well, and are dedicating more resources to creating them.

Lately, OEMs have been borrowing practices from fashion designers. Materials such as cow fur, aluminum, leather and carbon fiber have transcended industrial design and are now finding their way onto the cases of many laptops.

A Dutch company, Ego, is targeting those who prefer hardware that matches their wardrobe over top-of-the-line performance. Their first laptop, a clamshell not unlike Apple's iBook, is a dramatic departure from typical portable computing devices. It features a handle and can be carried like a purse.

ASUS has answered the call with its Lamborghini model, to be released in February, and Sony's Vaio line focuses on a smaller physical footprint, while remaining fully functional. Gateway has taken many cues from Apple's iMac, with its all-in-one "One" desktop.

At CES 2008, Microsoft held a "fashion show" for these new devices, along with a showcase designed to mimic a boutique storefront.

The personal computer has transformed from a tool to a fashion accessory, and Microsoft sees this trend continuing into the next year. Kano previously worked under former Windows chief Jim Allchin, who pushed OEMs to develop design-conscious computers. In turn, she wants to establish fashion as a critical element of both software and hardware design, bringing the back the "cool" to Windows PCs. 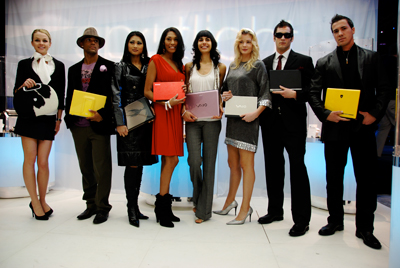 22 Responses to Microsoft: The future is in fashionable PCs