Way back last August, the Mozilla organization's developers set their sights on November 2009 as a release timeframe for Firefox 3.6, the latest round of functionality improvements to the most popular cross-platform Web browser. That date had been unofficially bumped forward to December, but that was before the release of the earliest betas to the general public slipped past the original mid-October release window -- it ended up going live just before Halloween.

The delays in the development of Firefox happened then, not now. But with only three days left in the year, bloggers came to realize that general availability (GA) of 3.6 had slipped from its end-of-year targets set way back last summer. This despite obvious notices that a planning meeting on the subject of setting a date, was set for January 5.

In actuality, work is proceeding at full steam on the public Beta 5 of 3.6, released earlier this month; and the need for a Beta 6 was made evident weeks ago by releases of private test builds of Beta 6 at the same time Beta 5 was let loose. Betanews projects a 13.5% performance improvement in Beta 5 over the current stable Firefox release 3.5.6. But work obviously remains to be done, as 21 "blockers" remain in the Bugzilla database, many due to the change in its plug-in architecture -- now disallowing add-on components that were simply dropped into the components directory. 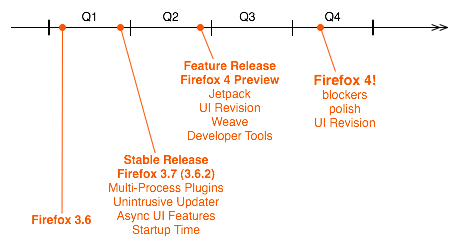 The latest quarterly timeframe chart released by Mozilla (actually released much earlier in December, not yesterday) clearly shows Firefox 3.6 being geared for a mid-January release, with the first stable Firefox 3.7 still aiming for mid-March -- which is not a delay, even from Mozilla's mid-summer estimates. The first public peek at Firefox 4 is slated for late Q2; and although RTM is set for Q4, history tells us to expect that actual time to fall in early Q1 2011.

Mozilla estimates some 600,000 active daily users of various builds of Firefox 3.6 already in the field worldwide, making the collection of "telemetry" from testers of this build some of the most intense in the product's history.