The smartphone data comes from Gartner, which measures actual sales to customers rather than to carriers or dealers. By that reckoning, Windows Mobile sales only declined by 1.47 million units to around 15 million units year over year. By comparison, iPhone OS sales more than doubled -- to nearly 25 million units -- with share rise to 14.4 percent from 8.2 percent year over year. Android made significant gains -- and at the expense of other Linux-based smartphone operating systems, too -- with share rising from 0.5 percent in 2008 to 3.9 percent in 2009 on 6.8 million units shipped. Android made its biggest gains of the year during fourth quarter.

"Smartphone sales to end users continued their strong growth in the fourth quarter of 2009, totaling 53.8 million units, up 41.1 per cent from the same period in 2008," Carolina Milanesi, Gartner research director, said in a statment. "In 2009, smartphone sales reached 172.4 million units, a 23.8 per cent increase from 2008." Milanesi noted that "smartphone-focused vendors" captured "market share from other larger device producers."

The only really good news for Microsoft is that Windows Mobile share stank but sales didn't reek. As aforementioned, Windows Mobile dramatically lost more market share than number of units shipped. Windows Mobile fell to No. 4 position from No. 3, replaced by iPhone, for smartphone OS share. Microsoft still has some footing for recovery, particularly as it up to Windows Phone 7 Series device releases. That said, Android and iPhone OS are rapidly rise stars, even as Windows Mobile's shine dims. 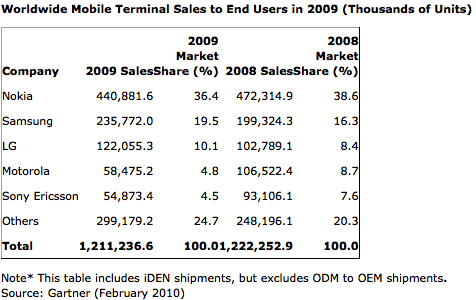 Nokia remains the market share force for all other handset competitors to reckon with. While Nokia lost market share in 2009, prospects are much better for 2010. Symbian OS smartphone share dropped from 52.4 percent to 46.9 percent on an increase of about 8 million more handsets sold than 2008.

"Symbian had become uncompetitive in recent years, but its market share, particularly on Nokia devices, is still strong," Cozza said in a statement. "If Symbian can use this momentum, it could return to positive growth." Much depends on the operating system's first, truly open-source version, Symbian^3, which the Symbian Foundation announced during Mobile World Congress.

"Nokia will face a tough first half of 2010 as improvement to Symbian and new products based on the Meego platform will not reach the market well before the second half of 2010," Milanesi warned. "Its very strong mid-tier portfolio will help it hold market share, but its ongoing weakness at the high end of the portfolio will hurt its share of market value." 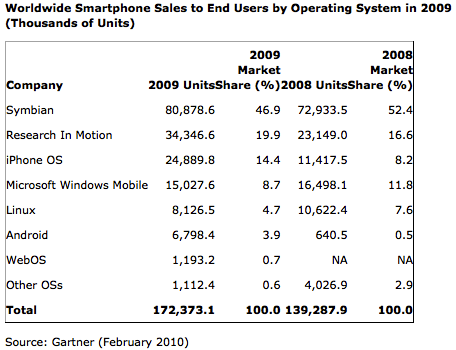 Nokia stood out from nearly all other handset manufacturers during Mobile World Congress by not announcing a slew of new handsets. Still, Symbian^4 is expected to release by end of year. Both new Symbian versions will add functionality as much to mid-tier handsets as smartphones. Nokia sales may be weak in the United States, but they're strong in nearly every other region and across nearly every handset category.

I take a moment to focus on Nokia because of American blogger and journalist obsession with smartphones, particularly iPhone. In many regions of the wolrd, the cell phone is the first connected device that people own -- not a PC. In emerging markets, services like mobile money (and mobile banking) are transforming peoples' lives in meaningful ways. Application stores and touch-feely touchscreen features American bloggers and journalists coo so much about matter much less to people in emerging markets with more basic needs that a Symbian -- or even Android or Windows Mobile -- handset might better serve.

22 Responses to Android and iPhone smack down Windows Mobile