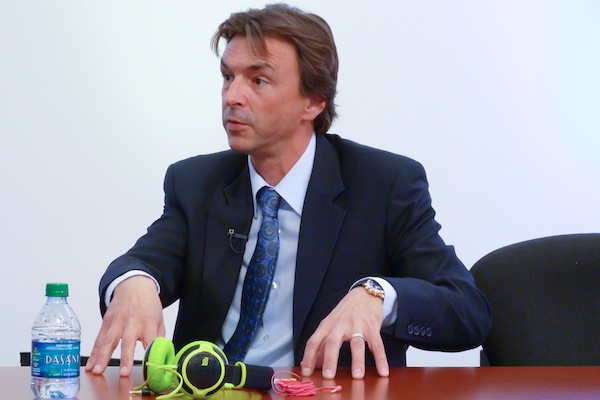 Yesterday, during an exclusive press briefing that was also available by invitation-only webcast, Sony Electronics president Phil Molyneux detailed how the company would embrace the connected anytime, anywhere and on-anything era. He also addressed, and not necessarily answered, questions about Sony's Internet TV and tablet strategies. If one word defines his plan for the consumer electronics company: Differentiation. I attended the event at Sony Electronics' corporate headquarters in northern San Diego, which is about a 30-minute drive from my apartment. Sony Electronics is the largest of Sony's six US organizations.

Molyneux, a 24-year Sony executive, assumed his current responsibilities just six months ago. During his first two months Molyneux traveled to 15 states, visiting 250 retail stores. He wanted to understand Sony's retail situation in the United States. "You can go pretty much into any retailer in the US and you'll be faced with this wall of LCD TVs. I call that the 'sea of sameness.' From a consumer's perspective, you look at that wall and this line of LCD products...how can you decide which product to purchase?"

To Molyneux, Sony Electronics' challenge is clear -- to "differentiate and value out the message of our products. We have great products, but unless we tell consumers about them, they're not going to learn." The problem he identified is typical of companies like HP, Samsung or Sony that sell many products that work loosely or tightly together. There are benefits to be gained when using Product A with Product B, C or D, but these typically need to be demonstrated. That's something Sony Electronics isn't getting from the "sea of sameness" in, say, Best Buy stores.

Carving out the "Golden Space"

Sony Electronics is embarking on something I've seen other tech companies do before, what Molyneux described as the "golden space." It's essentially a stand-alone space inside the retail shop. "We place TVs there, Sony Bravia TVs, and we also have audio -- surround-sound systems -- with it. And it has a module that comes up on a screen where the consumer can select the configuration of TV, home audio and various content they want to play with." He described the experience as a "simulation" of what they might experience at home. "We take the LCD off the wall, off the sea of sameness, and we place it in this unique environment where the consumer can interact, play, listen and see."

It's an interesting concept, but an experience already available. During the holidays -- and maybe still today -- my local Best Buy had a Google TV kiosk showing off Sony Internet TV and Logitech Revue. It was highly interactive and took place around Sony televisions.

Another part of the strategy includes what Molyneux described as a "channel rebalance." Sony Electronics' new president recognizes that different retail stores have different kinds of customers. "Our product set as well as our communication centered around the product can be tuned effectively to engage the consumer," he said. Changes also will be made to Sony Style stores, which are laid out in a "SKU arrangement" now. He said that the "layout of the store and how you flow through the store as a consumer will be very engaging in the future."

My local mall here in San Diego is unique for having Apple, Microsoft and Sony branded stores. If I look back three years, the Sony Style store felt consistently and remarkably empty compared to Apple Store. But by early 2010, something dramatic happened -- the Sony Style shop got consistently busy. Perhaps that's reflective of changes already underway. "The last few years, Sony could have been a little bit slow in some cases," Molyneux said. "But we worked extremely hard as a corporation to transform ourselves and become more agile, more up to date and engaging of the consumers."

Molyneux couldn't say enough about the importance of retail to Sony Electronics' 2011 strategy. "This year we will contribute around 40 percent of our advertising and promotion funds to improving the shop-front presence of Sony as well as the message around the great products we have." The investment will be made "across the complete retail landscape," not just Sony Style stores.

Shoppers can expect to see even more color (have you seen those blinding keyboard covers) and splash as Sony courts younger buyers. "We're really focused on the youth market and the opportunity that presents to us in the future," Molyneux said. He used as example the PIIQ line of headphones. "The youth today will become the mainstream market of the future."

Sony's goal is to be No. 1 in the consumer electronics industry by 2013. Well, Samsung might have something to say about that.

I asked Molyneux if Sony planned to demonstrate the value of using different products together as part of its strategy of improving the shop-front experience. I got an unexpected answer -- about 3D, a technology around which the company's commitment borders on obsession. "We're the only company that has the complete 3D ecosystem. We call it 'from the lens to the living room.'" He observed that Sony sells broadcast cameras that capture video in 3D, sister company Sony Entertainment produces 3D movies, 3D games are available for PlayStation 3, consumers can shoot 3D video on some Bloggie videocams and Blu-ray drives play back 3D content, which can be watched on Sony TVs. "We're building that 3D world."

Maybe, but is the consumer market ready to live in that 3D world? I'm not convinced, but obviously Sony is committed. Molyneux observed that HD took 30 years from inception to broad acceptance by consumers. By comparison, 3D has "accelerated that number to 18 months." Molyneux emphasized: "We're very happy and confident with the development that we've seen." I see 3D glasses to be a barrier to adoption, but Molyneux said that "consumers don't want to wait" for something better." Wait they would have to otherwise. "At CES we demonstrated glassesless-free 3D...where that technology is today, it's in a demonstration mode. But commercialization of glassesless-free 3D is a long way off."

While Sony isn't waiting on 3D, its strategy around another hot, consumer electronics category is nebulous. "That's a very interesting topic," Molyneux said about the tablet market. "At CES we announced that we are pursuing a tablet range that we will bring to market." He observed that about 100 tablets were announced during the trade show in January. "We know for sure that to stand out from the crowd -- we must stand out -- that we have to have, deliver a differentiated entertainment experience to consumers. We're very focused on that." He wouldn't give a timetable for release. "Today, that's all I'll say. You have to wait a little bit longer for more information."

It's anyone's guess, how Sony could differentiate a tablet, but it's a sensible approach. I should point out that like Apple and Samsung, Sony has the manufacturing and, more importantly, distribution mechanisms to bring a competitive tablet to market. But soon enough?

Molyneux touted Sony's first-to-market position with Google TV. "We're very proud of that," he said. "Sony Internet TV is just one example of how we bring new innovations to the market." He strongly expressed Sony's commitment to Google TV, which offers a different Internet experience than Sony's Bravia connected TVs. Both product lines offer many of the same content types, although Sony's Google TV product can't yet access Hulu Plus. For Sony Internet TV, the main advantage is being able to watch television and use the Web simultaneously, Molyneux emphasized.

Google TV runs Android, as do some newer Sony Ericsson phones. Molyneux put the Google operating system in context of Sony's own software development. "This is a movement around the globe for many manufacturers," he said about Android. "It's bringing consumer benefits -- we're leveraging that where it's applicable and where we see that it fits to the consumer's needs." Elsewhere, Sony will develop its own software. "It's all about an open world. We want to deliver the best experience to our consumers, and allow them to access content anyplace, anytime, anywhere."

[Editor's Note: Phil Molyneux title corrected. He is president and COO not CEO.]