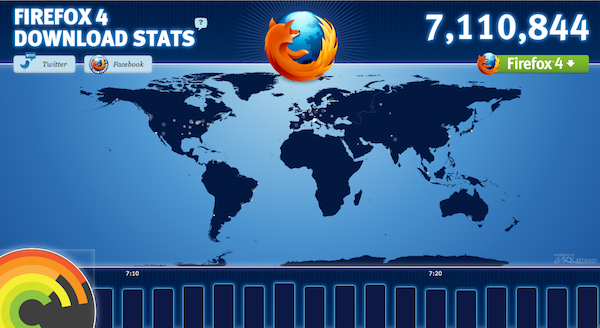 "I think Firefox 4 proves once again its popularity," Betanews reader Comet writes in comments about three hours ago. "In less than 24 hours it has already surpassed the 4 million download mark. What surprises me the most is that Firefox doesn't have the support of big companies like Microsoft or Google that literally waste millions of dollars trying to get you to download their browser. As long as a non-profit organization can keep its popularity high perhaps there is still hope for a non-corporate controlled web. Big thumbs up for the browser wars yet again. Overall all browsers are moving forward quite well."

Competition is fiercer than ever -- and, yes, it is a new browser war. Just this month, many new browser versions released: Apple Safari 5.04, Google Chrome 10, Internet Explorer 9, Opera 11.10 and, of course, Firefox 4. Mozilla and Opera released new mobile browsers and Opera opened an app store.

Firefox is popular among Betanews readers.

"Firefox is my favorite at this point due to the high quality zoom and the available add-ons," writes Robert Rauck in comments. "I have tried Chrome and Opera and they both have good features but I don't like them as well over all." Tom Thumb: "Firefox 4 is my primary browser, I like the ability to customize it to my preferences."

Ian Brunton, on using Firefox: "I rely quite a bit on the extensions, it's reliable, and despite what other people have said on many websites I don't find it slow. I've never tested its start-up with a stopwatch against anything else, but my microseconds aren't really in that short supply that I can notice, let alone care about, a difference in start-up time between Firefox and, say, Chrome."

"Firefox is like Windows," John Mann comments. "No matter how much I complain and want to switch to something else, I always come back because it just does almost everything I need it to do."

Firefox 4 versions for Windows, Mac OS X, and Linux are available from Fileforum. Please share your first impressions about the browser in comments, or email joewilcox at gmail dot com.