Could cable cutters give TiVo a second life? 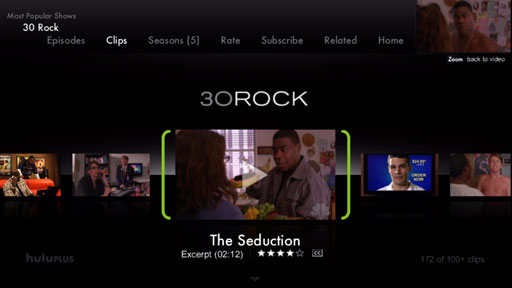 Hulu Plus is now (finally) available for TiVo premiere, which puts me about 10 steps closer to pulling cable's plug and going over-the-air and digital downloads/streaming -- that is if fraking AT&T Internet doesn't cap my bandwidth first.

Hulu popped the announcement this morning for the second time since September. But it's no foolie this go around. Hulu Plus really is available for TiVo Premiere.

"In celebration, TiVo is offering a 6-month free trial to those who purchase a TiVo Premiere from a retailer or Tivo.com," Rob Wong, Hulu director of product management, blogs today. "This offer starts today and runs until August 30, 2011. And TiVo subscribers who already subscribe to Hulu Plus can begin accessing their account with no additional charges."

Well, I'm sure glad I didn't buy TiVo Premiere a few weeks back. I held off specifically because Hulu Plus was listed as "coming soon." If not for my tight budget, I'd likely buy an HD antenna and TiVo Premier and cut cable's cord today -- well, IPTV. I have AT&T U-verse.

TiVo has come a long way since its founding in August 1997 -- and perhaps not as far as it should have. In technology, imitation isn't the best form of flattery, it's often the kiss of death. Cable and IPTV DVRs have long put the squeeze on TiVo, which pioneered the category. TiVo showcased its first DVR during the Consumer Electronics Show in January 1999. Two months later, the first device shipped -- not that anyone could explain it. TiVo geeks would chatter endlessly about DVR's benefits, but couldn't really explain them. Like almost everyone else, it wasn't until using TiVo that the benefits became crystal clear to me. It was one of those "ah ha" moments.

TiVo is a modern case study for good user interface design, even if the motif now looks somewhat clumsy and cluttered compared to, say, AT&T U-verse's program guide and DVR. Simply put: User interfaces are really hard to do well. Sometimes the most sensible of concepts flounders because the UI is poorly conceived. VCR recorders introduced the concept of time shifting long before TiVo, But the processes of recording shows and finding them on tapes to watch was too difficult for most people to regularly use. TiVo introduced in the program guide a much better user interface and offered capabilities people really wished they could have -- like the ability to stop or rewind live programming. TiVo and the VCR recorder used the same time-shifting concept, which user interface hobbled the one product and allowed the other to create a new device category.

Hulu Plus and other streamed/download-to-rent-or-buy services are simply another take on the time-shifting concept -- without fast-forwarding the commercials. Hulu Plus makes you watch them and purchased or rented programs for, say, Amazon or iTunes don't have them. But it's still about watching something later and with control over pausing and fast-forwarding/rewinding and choice of when to watch.

But like many category-creating pioneers, TiVo has lost momentum as more consumers opt for their cable, IPTV or satellite company's built-in DVR. At the start of 2006, TiVo had more than 4 million subscribers -- the number is about half that today. Still TiVo has cut some sweat deals. TiVo is available on Comcast, and Comcast's Xfinity on-demand library is coming to TiVo Premiere customers. By the way, TiVo announces quarterly earnings tomorrow, during which time more current subscriber numbers may be released.

According to a December report from Nielsen, four out of 10 U.S. homes use DVRs. Science Fiction was the most time-shifted programming category (can you say geek viewers), while "news and sports genres received relatively little lift from playback, not surprising since viewers generally prefer to watch these types of shows live," according to the report.

During fourth quarter 2010, the average U.S. home watched 10.27 hours of time-shifted programs -- 25.52 hours in homes with DVRs. That compares to more than 154 hours of traditional "live" TV, according to Nielsen. Funny, in my household more than nine out of every 10 programs watched is recorded. We almost never watch live TV -- save for breaking news.

I wonder: Could cable cutting be TiVo's second life? TiVo would certainly be important to my switching to OTA and streaming/downloads, now that Hulu Plus joins Amazon Video on Demand and Netflix. If my budget allowed, I'd cut the cord today.

If TiVo hasn't positioned its DVR as an OTA alternative, now would be good time. TiVo's marketing tag line is "Smart DVR, Brilliant TV." TiVo isn't just a smart DVR, it's about the only viable stand-alone option -- and one packing useful streaming services like Hulu Plus and Netflix. Sure, cable cutters can use Apple TV, Google TV or Roku for some of these services, but where's the DVR for over-the-air broadcasts?

Last month, I asked: "Who is cutting cable for Netflix, Hulu and OTA?" Among the nearly 40 comments, only one person mentioned TiVo, in passing. Are people put off by TiVo's monthly subscription fee? Has TiVo brand awareness really fallen so far behind Roku and other devices? Do cable cutters simply not care about DVR functionality? These are the questions I ask you to answer in comments. Also: Are you more likely to buy TiVo Premiere now that it has Hulu Plus? Would you be more likely to cut cable's cord?

14 Responses to Could cable cutters give TiVo a second life?