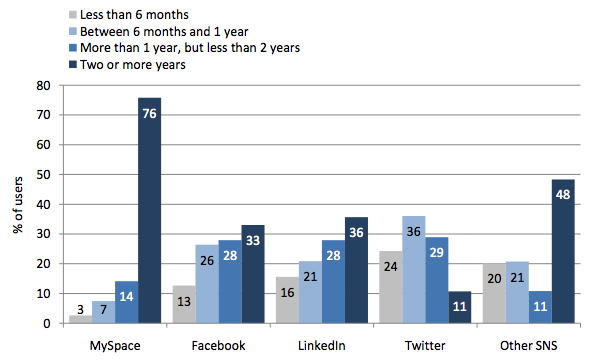 Today, Pew Internet released an 85-page report that is best described as a love letter to Facebook. The study smooches up to the social networking service in just about every conceivable way. Bottom line: Facebook has fundamentally changed where people spend time online and with whom they interact.

Surprisingly only 79 percent of Americans have used the Internet. (What are the other 2-in-10 people doing with their time?) Fifty-nine percent of Internet users, or 47 percent of all adults, have used a social networking service, like Facebook, MySpace or Twitter -- that's up from 34 percent and 26 percent, respectively, three years ago.

Teens and young adults concerned about being friended or followed by parents should worry. The average age of social network service users is 38, with over half 35 or older. Fifty-six percent are female.

It's not surprising that more social network users are on Facebook -- 92 percent -- but some of the stats for other services are surprising. For example, there are more social networkers on LinkedIn than Twitter, 18 percent and 13 percent, respectively. But Twitter users, like Facebookers, are more engaged, with 52 percent and 33 percent, respectively, using the services daily. By comparison, only 6 percent of LinkedIn users go there daily. The finding is interesting for the timing. LinkedIn had a huge public offering last month, while Facebook is preparing its IPO. Pew described Facebook as the "nearly universal social networking site," while "MySpace and LinkedIn are occasional destinations."

LinkedIn users tend to be the best educated -- 37 percent have a bachelors degree and 38 percent a graduate degree. By comparison, it's 21 percent and 18 percent for Twitter and 20 percent and 15 percent for Facebook, respectively.

MySpace is ailing, which is no surprise. Twenty-nine percent of social networkers use the site, but only 7 percent on a daily basis. Pew's survey found that MySpace users tend to be contrarians, while Facebookers are friendlier with people who think like they do. Facebook users are "more likely than others to cocoon themselves in social networks of like-minded and similar people," according to the report. "MySpace users are more likely to be open to opposing points of view."

Over 31 percent of Facebook friends cannot be classified into these categories.

Pew also called out higher trust factor: "Facebook user who uses the site multiple times per day is 43-percent more likely than other internet users and more than three times as likely as non-internet users to feel that most people can be trusted." That may be good for relationships but not so good when cybercriminals phish the service.

There is way more data in 85 pages than I can possibly give in about a 600-word post. If you're even the slightest interested in social media's impact on society, this is the report to read. Remember: Facebook only opened to the masses five years ago -- back when MySpace was social networking king.