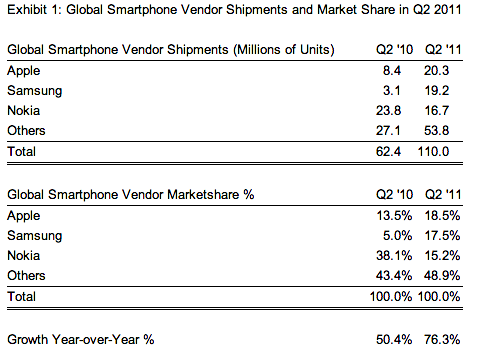 In a near photo finish, two upstarts simultaneously dethroned smartphone king Nokia as they scrambled for top spot during second quarter, globally. Apple and Samsung shipped 20.3 million and 19.2 million smartphones, respectively, according to Strategy Analytics. Nokia fell from first to third place, with 16.7 million units.

Samsung's ascension is nothing short of phenomenal, and that's remarkable considering how exceptionally Apple performed. Apple smartphone shipments rose from 8.4 million a year earlier, but Samsung even more -- from 3.1 million.

Samsung's three-mobile operating strategy, with Android increasingly most important, is succeeding in an iPhone one-OS world. The company identifies five "flagship" phones and two tablets -- all running Android. As Mawston observes, the Galaxy S series, including the hot S2, is hugely successful. This week, Samsung bragged about 5 million sales as of July 22, up from 3 million 30 days earlier. Galaxy S II achieved both milestones in 85 days and 55 days, respectively. In January, sales of predecessor Galaxy S topped 10 million -- after 7 months of sales.

Second quarter's results set up a showdown starting in Q3. Samsung's Galaxy S II achieved its big shipments during the quarter, China sales started this week and the handset won't be available in the United States until August at the earliest. Meanwhile, Apple is rumored to be launching iPhone 5 as soon as September. Samsung is in striking distance of Apple during third quarter. The longer-term question: Will Samsung's surge (assuming there is one) be sustainable after iPhone 5 launches?

"For the overall market to grow by double digits year over year, despite the decline in feature phones, is testament to the strength of the global smartphone market", Ramon Llamas, IDC senior research analyst, says in a statement. "While this is not a new trend -- smartphones have been the primary engine of growth for the last several quarters -- it does mark something of a transition point, as demonstrated by the growing number and variety of smartphones featured in the vendors' portfolios".