Developers say Google+ can catch up to Facebook in social 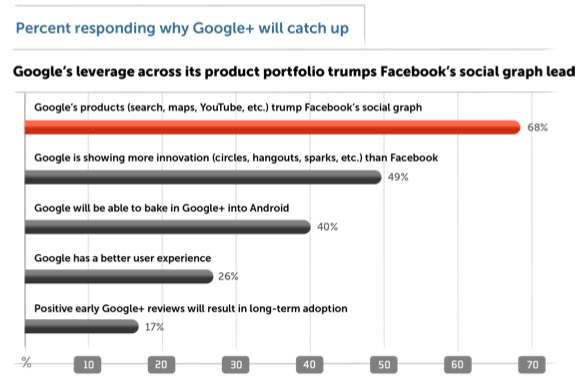 Well, so much for Facebook's 750 million active users as a competitive advantage.

IDC's quarterly survey of mobile developers couldn't have come at a better time for Google, soon after its Plus service opened on an invite-only beta basis. Developers -- 2,012 surveyed from July 20-22 -- are enthusiastic about Google+. "Two-thirds of respondents believe that Google can catch up to Facebook in social with Google+", according to the report.

"This will be a powerful asset for Google in gaining mindshare among consumers and developers as it competes with Apple, whose iOS tie-in to Twitter and social network Ping have not been as impactful as Google+", according to IDC.

Whether or not what developers believe will pan out or not is to be seen for sure, but their confidence in G+ means lots. Facebook's big growth spurt started after it began accepting applications. Surely Google sees G+ as a future applications platform.

Eighty-three percent of developer respondents said they would use Facebook social APIs during the next 12 months. "Google+ is nearly tied with Twitter, so developer preferences in this area will be very interesting to watch as Google's developer launch nears". Seventy-three percent of developers plan to use Facebook social APIs during the next 12 months -- 72 percent for Google+. The service isn't even officially open yet, so the potential implications are staggering. IDC's next quarterly report should indicate how much or how little, if the analyst firm continues to ask about Google+. The question: Is enthusiasm during the launch stage sustainable? That depends much on how quickly Google innovates and whether or not developers and other users tire of the service.

In my late June post "Is Google+ social done right?" I gave similar reasons as IDC's survey respondents: "Search and + tied to Google search and Android phones give Google the potential to amass a social community extended to its other products and services: Apps (for creating and sharing documents); Chrome (for which new version releases every couple months); Gmail for messaging anywhere (rather than the confines of Facebook's website); Wallet for making purchases; Web Apps (for playing games and other fun stuff); among many others".

This is my second story from the report. The other: "Developer interest in Android increases, approaches iOS". There are five, separate and insightful key findings I see in the report. I may write on another in a few days.