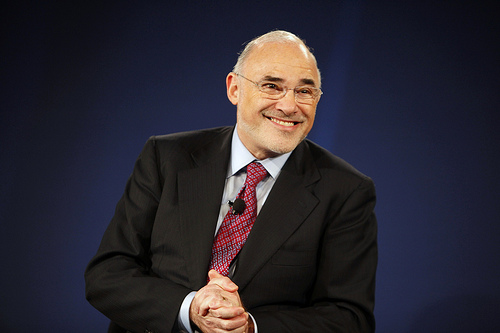 It has been a rough week for Hewlett Packard, which stock took a beating following Thursday’s announcement that the company was rapidly exiting the hardware business, all but killing off WebOS and its associated line of mobile devices, including TouchPad. Within a day, a fifth of the company’s value disappeared on Wall Street.

How much, you say? A staggering $16.2 billion -- some $4 billion more than Google paid for Motorola Mobility. Analysts seem dismayed, and have downgraded the company’s stock. At least one of the credit rating agencies has threatened a downgrade of HP’s debt, and investors seem to doubt the company’s ability to make the switch.

Among long-time investors, CEO Leo Apotheker’s move may bring back memories of company executives of its recent past: Carly Fiorina. She pushed hard for a merger with Compaq, a move that created deep divisions within the company and likely contributed to her downfall.

There’s also Mark Hurd, who was just as blemishing on HP’s standing as Fiorina was. While he spearheaded the company’s $1.2 billion purchase of Palm, most will remember him for his inappropriate relations with an HP contractor that lead to his ouster.

So we come to Mr. Apotheker, which I’d be willing to bet many investors hope was the right man for the job. I’m guessing there might be a few people who may be second guessing that.

In the past year under HP’s newest chief executive things have not gotten much better. He has cut sales forecasts for the company three times, and is now proposing what amounts to the biggest shift in strategy in the company’s 76 year history. His aim? He wants to compete with IBM and Oracle.

For whatever reason, Apotheker decided to abandon the consumer. Investors' reaction to this shouldn’t be surprising: According to IDC, HP is the #1 overall PC manufacturer with nearly a fifth of the market. This isn’t just some also-ran throwing in the towel: it’s the market leader simply giving up its crown.

It's almost mind-boggling -- almost as if Apotheker used the bungling of WebOS and its failure in the market place as an excuse to seismically shift HP’s business. While I could understand a gradual exit, completely cutting off its nose to save its face is not the answer.

So, can HP survive Apotheker? I don’t think it can, and I’d argue this strategy is his swan song. The enterprise market -- while certainly profitable -- is quite small. It’s already awash with a slew of competitors vying for a piece of the pie, and it’s very hard to establish yourself.

Yes, the profit margins in enterprise are much higher. But you need to have a foothold in the business to make money first. Add to this that the future of computing is going mobile, so why stop now?

WebOS had the chance to be good. The criticisms of its performance were more linked to substandard hardware than the actual platform itself. HP never gave it a chance to shine: six weeks on the market is not enough. You want to get into the software business, HP? What about the cloud then? Combine it with a solid mobile offering and you’re golden -- and ahead of the curve.

Instead, Apotheker and friends have decided to run away with their tail between their legs -- more a result of poor business planning and execution than an actual failure in the marketplace.

HP may think its name alone will carry the day, but we all know that’s not going to happen. This company seems to continually make knee-jerk decisions -- the Palm buy, its tablet plans, and now this exit from the consumer market -- without a lot of due diligence.

This schizophrenic way of doing business is the reason why its stock dropped 20 percent on Friday. Worst of it all, with this path there’s almost no way back. And if there is, its going to be a very, very expensive one, and HP will come out of it even weaker than it is now. Sounds like it may be time for a change of leadership in Palo Alto.