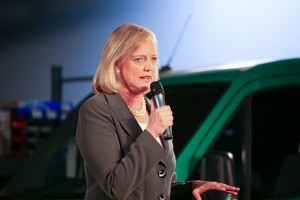 In what could only be considered a full rebuke of Léo Apotheker's leadership, HP's board of directors announced late Thursday that it had appointed former eBay CEO Meg Whitman as president and CEO of the company, and Ray Lane as executive chairman of the board.

Apotheker would be pushed completely out of the company, including giving up his seat on the board. The news confirms reports that first surfaced on Wednesday from several sources indicating a rumored executive shakeup.

A replacement for Apotheker's board seat was not immediately named, or whether Whitman would assume that position.

In speaking for the board, Lane voiced the typical niceties associated with a departing executive. However, he also seemingly criticized Apotheker for failing to move the company forward.

"The board believes that the job of the HP CEO now requires additional attributes to successfully execute on the company’s strategy," Lane said in a statement. "Meg Whitman has the right operational and communication skills and leadership abilities to deliver improved execution and financial performance.”

During his year at the helm of HP, Apotheker pushed for the company's exit from the consumer business and also killed the company's tablet efforts. At the same time, however, HP kept missing sales targets, further damaging Apotheker's position.

Where Whitman plans to take HP is not yet known, as her statement accepting the position was short in both length and details.

"I am honored and excited to lead HP," Whitman said. "I believe HP matters -- it matters to Silicon Valley, California, the country and the world."

During a conference call today, Whitman kept in place Apotheker's most controversial, recent strategies -- spinning off or selling off the PC business and killing TouchPad -- moves that would seem to have precipitated his ouster. "The initiatives taken on August 18th are right," she said.

But in Q&A that followed, Lane waffled on the fate of the PC division -- the Personal Systems Group: "Our intent all along was to look at whether there was a benefit to investors or customers. I imagined a PSG that would carry an HP brand with it...[that] would be stronger for customers outside. He emphasized: "If it cannot be better on the outside, it'll stay inside."

5 Responses to Léo Apotheker ousted at HP, Meg Whitman in as president, CEO