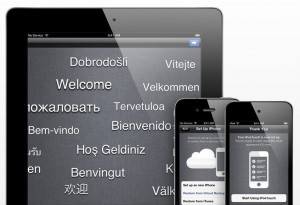 Apple's highly-anticipated iOS update is coming your way. Today, during its "Let's talk iPhone" event, the Cupertino, Calif.-based company officially launched the fifth version of the mobile operating system. iOS 5 will be a download available for all currently supported devices, including iPad, iPhone 3GS and 4 and the new smartphone coming later this month. iOS 5 will be available on October 12.

Apple is pinning much on iOS 5, which weaves tightly with iCloud, the new suite of online synchronization services. The company unveiled both in early June, during the Worldwide Developer Conference. Apple claims more than 200 enhancements.

Today's launch event is a crucial coming-out party for Tim Cook as new CEO. He replaced Steve Jobs in August. Jobs is legendary for the so-called "reality-distortion field", a seemingly hypnotic effect where Apple's cofounder makes almost any new product announcement magical. Jobs is a master of selling aspiration, of making people, well some, believe that Apple's new this or that will make their lives better. Cook has presented before, but never with so much expectation -- or anticipation -- around him.

Cooked kicked off the event in good form by recouping Apple milestones, but turned the iOS 5 review of features to Scott Forstall, senior vice president of iOS software.

Among iOS 5's most notable features are those copied from Android:

1. Cloud Synchronization. On Android phones, signing into the Google account syncs up all the search and information giant's services -- and when switching phones also restores apps, settings and personalized features, like desktop wallpaper. With iOS 5 and iCloud, iPhone users will get most of the sync benefits Androiders have long enjoyed.

2. Notifications Center. Just about Android's best user interface feature is the notifications bar across the top of the phone's screen. Now, instead of annoying notifications that interrupt or are lost in numerical count on an app in another screen, iPhoners can enjoy the convenience of notifications collected in one place and pulled down for easy reference.

3. Over-the-air updates. Apple has made iPhone slave to iTunes for far too long. Androiders have long enjoyed the convenience of OTA, which is now available for iOS 5 as part of iCloud capabilities -- what Apple markets as "PC-Free".

4. Photo sync. On Android, from the camera or photo gallery, users can send photos to any supported service installed on the phone. So if I want to take a photo and send to Twitter, Android let's me do that from the camera. Oh, but not iOS. Apple presents sharing options for its services but none other. iOS 5 now offers similar sharing capabilities to Android.

5. Twitter. On Android, Twitter is perhaps too much of a good thing. Apple is following Google, but going seemingly deeper. Androiders can tweet from some apps, like the browser and YouTube, a capability iPhoners will get from Twitter being integrated into iOS 5. Too bad for Apple that Google+ is the hot, new social network.

Some other notable features:

By many measures, iOS 5 is the biggest release to date.