Five years on, Microsoft finally gives up on Zune 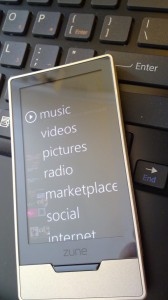 It seems like eons ago that the first details of Microsoft's Zune player were leaked right here on the pages of Betanews, but five tortuous years later that effort is over. On the company's official support website, Microsoft let users know that it was finally giving up.

This was a complete reversal from its statements just yesterday denying that its music player was dead. Asymco founder Horace Deidu noted the irony. "Yesterday Microsoft denied that Zune was being discontinued," he mused. "Today it confirmed that Zune has been discontinued."

Zune may continue to live on in some form through Microsoft's mobile efforts, according to the company. "We recently announced that, going forward, Windows Phone will be the focus of our mobile music and video strategy, and that we will no longer be producing Zune players," Microsoft says. However, it promises current users that it would continue to support Zune services and honor warranties of every device.

That said, it certainly does raise the question of just how long Microsoft will continue to grandfather this small but significant group of consumers who require Zune services in order for their players to operate. Would it be as long as it takes for the last players to sell and those warranties to run out? Or would Zune owners be at the mercy of Microsoft, who could choose to end services at any time it wishes? The company doesn't specify.

Either way, Microsoft has made it no secret that it was moving away from Zune. In March it "unofficially" killed the device, aiming instead to focus on a multi-platform strategy including its then-upcoming Windows Phone 7 line of devices. It seemed to be a smart move, given its chief competitor Apple has done the same thing with its focus on the iPhone.

In the same token, the Zune just never caught on. My review of the original Zune back in December 2006 called it a moral victory for Microsoft, but a failure as an iPod killer. I was apparently right: even at its best points, Zune was still outsold by the iPod at a rate of nearly 20-to-1.

Microsoft now moves onto Windows Phone, and undoubtedly Redmond hopes for a much different result. Whether that actually happens is anyone's guess.

7 Responses to Five years on, Microsoft finally gives up on Zune