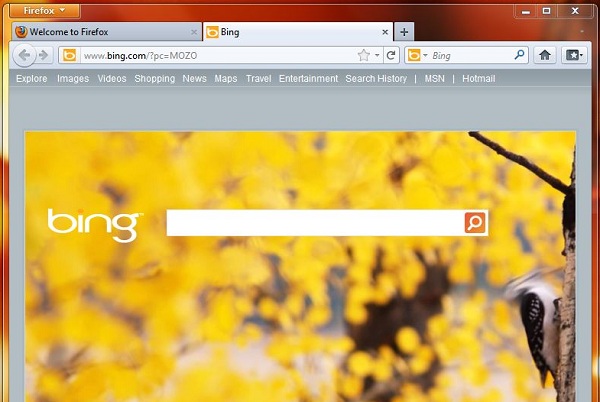 In the rush to cover Nokia World and new Windows Phones, I missed something kind of ground quaking yesterday. Microsoft is promoting Firefox with Bing. The default search engine, which users can change, is Google on standard Firefox. Now they can get the browser with Bing as default. Did hell freeze over and I miss the tweet?

Firefox exists today because of Google. People can rabble on about the importance of open-source and raise Firefox as the poster application for the movement's success. Software development isn't free, and running an organization and marketing products require capital. Firefox launched 7 years ago next month, and Google not only has powered search but provided through the bundled service the cash that keeps the organization running. Why on earth, or any planet, then would Mozilla jeopardize that relationship?

Sixteen days ago, Mozilla released its annual report, revealing that 98 percent of revenues come from search. The majority must be from Google, because it's the default search engine and Google is No. 1 in most countries (okay, not China).

Web browsers languished after Microsoft won the browser wars and essentially extinguished Netscape as a rival. But bundled search, with Google coughing up fees, revived browser development with Netscape (before its eventual death) and Mozilla leading a new charge into territory conquered by Microsoft in the mid-Noughties. Good thing for Mozilla that Microsoft had largely abandoned that territory by letting Internet Explorer development languish. Firefox charged into IE territory -- as did others. Internet Explorer has retreated since, with usage share down to 54.39 percent in September, according to Net Applications, from about 90 percent in 2004.

But Mozilla is losing usage share, too, as partner Google laps it up. Firefox fell to 22.48 percent from 23.52 percent usage share between November 2010 and September 2011, according to NetApps. September marked the fourth consecutive month of decline for Firefox. Meanwhile, Chrome usage share rose to 16.2 percent from 9.57 from November to September, consecutively gaining share for all 11 months. At this pace, Chrome should catch Firefox by mid-2012. That makes Google a new-found competitor and one taking money from Mozilla's wallet.

Mozilla has two good reasons then to release Firefox with Bing: Google is a competitor, and Bing can make up search revenues lost to Google. Microsoft powers Yahoo search. Combined, they had 31 percent US search share in September, according to comScore. That's just one country.

But there is another reason to consider, and this one could really lead to a hell freezes over announcement. Mozilla's search deal with Google is up for renewal next month. Could it be Mozilla is prepping for a switch to Bing as default, which would be a huge coup for Microsoft and eventually Mozilla if Bing search share rises. The move also could be little more than a negotiating tactic, with Mozilla looking to leverage Firefox with Bing as it works out a new agreement with Google. Regardless, there's a new choice for users, not that switching search providers is hard in Firefox.

Still it removes an extra step. "We’re teaming with Mozilla to release Firefox with Bing, a version of the popular Web browser that includes default search settings for Bing," says Tor Steiner, of Microsoft's Bing team. "Now Firefox users who are Bing enthusiasts can use Firefox with Bing to use the Web the way they want without having to take extra steps to navigate or customize their settings to Bing".