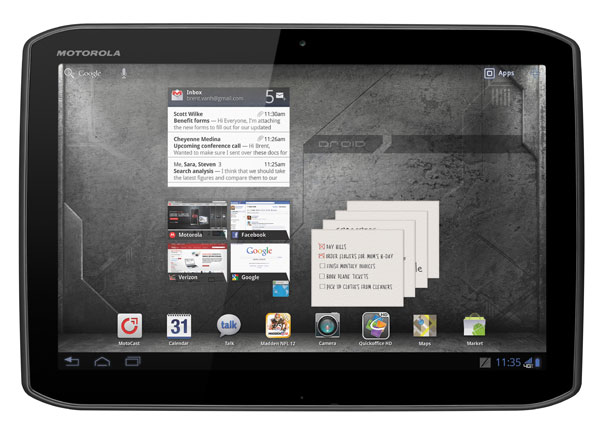 I wouldn't, and I'm probably wasting time bothering to ask. Many of you won't either. But, please, do tell. Your reasons why or why not are valuable, and you can offer them up in comments.

Droid XYBOARD replaces the XOOM, and it's unclear whether the predecessor's brand disappears (I assume not) or if XYBOARD is a Verizon-exclusive brand like Droid (I assume yes). Whichever, the new tablet is all about rebranding, rather than being a worthy successor to XOOM. By the specs, there nary is anything to tell the tablets apart -- other than price, a little Battlestar Galactica-like trim to the corners and introduction of a smaller model. Now there's an 8.2-inch Moto tablet to compliment the 10.1-incher.

Over Black Friday weekend, Verizon offered an unbelievable deal on XOOM LTE -- $199.99 with two-year activation. I bought one, and it arrived this week. Looks like Verizon cleared out excess inventory in preparation for XYBOARD. Here's how they compare:

These prices are $100 each less than comparable iPad 2s, which have slower 3G and not faster 4G radios, but don't require data plan. Verizon requires two-year data commitment with XYBOARD purchase.

Regular price on XOOM -- still heavily discounted from its release -- is $299.99, but new tablets are out of stock. Strangely, Verizon will sell you a refurb for $100 more. How fraked is that? What might really distinguish the tablets is battery -- 3250mAh for XOOM vs 7000mAh for XYBOARD, but strangely Verizon puts usage time higher for the older tablet, that's 540 minutes vs 480 minutes. Something else: There's no MicroSD port, so memory isn't expandable like it is on XOOM.

That's the apples to apples comparison -- now for some Apple to XYBOARD comparison:

By the specs and price, I'd take XYBOARD over iPad 2. Commenters can debate Android vs iOS platform and applications benefits. But there's another option to consider:

Amazon Kindle is $199, and offers most of the same benefits -- sans camera, 4G and swapping Gingerbread for Honeycomb, for operating system.

I've got three problems with XYBOARD:

What the hell are Motorola and Verizon product managers thinking? Surely Verizon execs see 4G LTE as differentiator enough. I'm not sure it is -- hence the pricing question this post's headline asks.

Based on BetaNews' tablet pricing poll, most of you don't want to pay even what the lowest-priced XYBOARDs sell for -- $429.99 and $529.99. Among the 1,353 respondents so far, only 5.46 percent would spend $399 or more for a tablet. The majority -- 58.98 percent: $199 or less. By that measure, XOOM was priced to sell over Black Friday weekend and XYBOARD is overpriced. The config looks pretty outdated looking at, for example, ASUS Eee Pad Transformer Prime, which packs quad-core processor.