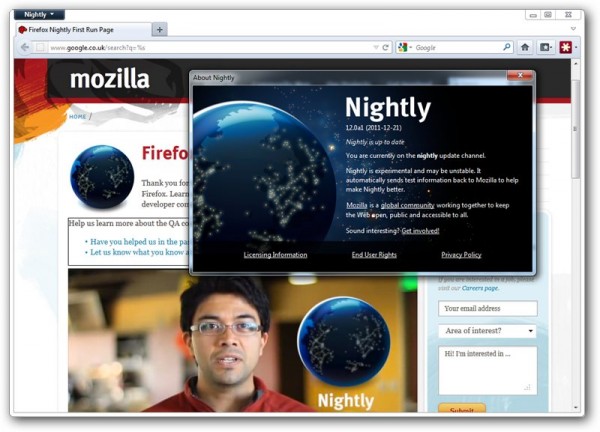 The Firefox development merry-go-round has moved on again, with Firefox 10 Beta and Firefox 11 Aurora builds being joined by two separate versions of Firefox 12: Firefox 12 Nightly and Firefox 12 UX, the latter build representing the efforts of a team focussed on delivering improvements to the Firefox user interface.

Despite the lack of any major revamps, there’s enough new features and interface tweaks filtering through the various builds to make the next three planned versions worth looking out for. Get a head’s up on what’s coming and discover which build is best for your current needs with our updated guide to what the future holds in store for Firefox.

This is the latest stable release of Firefox, and as such is recommended for most users, although the number of interesting new features appearing in later builds coupled with the lack of new features in this latest release make it something more experienced and impatient users might be tempted to skip.

Firefox 9 contains only one change of note, and it’s an under-the-hood tweak at that. Nevertheless, support for “type inference” means web pages containing Javascript will load noticeably quicker than before. In addition, OS X Lion users will see another two features -- support for two-finger swiping when navigating, and better integration of Firefox themes -- worth checking out. Ultimately, though, version 9 won’t go down in the annals of major Firefox releases.

The most significant change Firefox 10 will bring to most users is its new assumption that most add-ons are compatible with an updated build unless the developer specifically says otherwise. This should lead to a more seamless update to new versions of Firefox, and full details of how the new system works can be read at this Mozilla Wiki article.

There’s also a change to the Launch bar, with the browser forward button disappearing from view.

Web developers will be particularly pleased with Firefox 10, thanks to a number of major new tools, all accessible from the Firefox > Web Developer menu. The most notable of these is an Inspect option that allows developers to visually inspect pages with the help of a Highlighter tool that makes checking a page’s CSS and HTML code that much easier. This feature was originally planned for Firefox 4, but since its postponement has been significantly overhauled.

Version 11 doesn’t exhibit much in the way of major features -- a number slated for inclusion in Firefox 11 according to the Features/Release Tracking page aren’t present in this first alpha build. Those that are present include support for synchronizing Add-Ons in Firefox Sync, partial support for importing data (bookmarks, history and cookies at this early stage) from Google Chrome and two new tools for developers: a Style Editor for tweaking CSS settings on the fly, and a new 3D view (Tilt) for Page Inspector.

At the time of writing, Firefox Nightly exhibits no new features above and beyond that of Aurora - but there are some interesting developments in the pipeline, as revealed on the Features/Release Tracking page of the Mozilla Wiki.

These include a number of features ported across from the UX build (see below), including an integrated download manager instead of a separate pop-up window, plus full integration of Web Apps into the desktop. Also slated is renewed support for inline autocomplete, a feature ditched from version 4.

Nightly is also available as a 64-bit build for compatible versions of Windows and Linux.

Introduced in our last update, Firefox UX (also available as a dedicated 64-bit build for Windows and Linux) provides a parallel Nightly build of Firefox that concentrates on developing a new interface for Firefox. Some of the features previewed here have finally made the transition to the Aurora channel, meaning they will soon appear in the version of Firefox most people have installed on their machines.

Other changes remain exclusive to UX for now, including the integrated download manager widget that appears in the top right-hand corner of the window, a rather rudimentary looking New Tab page, and some other more minor tweaks like the removal of Address and Search bars when running a Web App such as twitter.com via its own button.

For an idea of what else UX may see appearing in the near future, check out this Mozilla UX presentation from August.

Which version of Firefox should you try? Stick to the most stable version you feel comfortable with, although there are a number of new features filtering through versions 10, 11 and 12 to tempt even the most casual user into taking a sneak peek into the future and install a less stable build. And despite the lack of new features in version 12 of Firefox UX, if you’ve not yet previewed some of the changes to the Firefox user interface being developed, it still represents a tantalising glimpse into the future.

Back up if you plan to try out Beta or Aurora builds of Firefox. And If you do decide to give the Nightly or UX builds a try, consider using a non-critical machine or virtual setup (try VirtualBox) instead of your main computer, just in case…