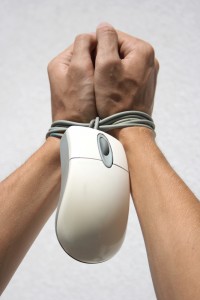 Jan. 18, 2012 is designated SOPA blackout day, with prominent websites planning to go dark in protest of two bills working through Congress -- Stop Online Piracy Act and PROTECT IP Act (PIPA). If you've got a big school project due Thursday and plan on using Wikipedia, get your research done today. The community-based encyclopedia plans to go dark tomorrow, and it's not alone.

The proposed legislation has generated gigabytes of negative responses, which included a Go Daddy boycott for supporting SOPA (since retracted) and culminates in tomorrow's blackout. Two months ago, I posed poll: "US Congress is considering two new copyright bills: PROTECT IP and Stop Online Piracy Act. Do you support them?" More than 3,500 responses later, 95 percent answered "No". You're not alone.

To recap, Senators introduced PIPA in May and House representatives did likewise with SOPA in October. Either bill would give the government broad powers to take down websites, seize domains and compel search engines from indexing these properties. Little more than a request from copyright holders is necessary. It's essentially guilty-until-proven-innocent legislation that would punish the many for the sins of the few, while disrupting the fundamental attributes that made the Internet so successful and empowered so many individuals or businesses to accomplish so much. (Review the bills: PIPA. SOPA.)

Wired UK's "SOPA 101" guide is one of the best primers posted in recent days, if those bills are too long (and wordy) for you.

Last week, the White House finally took a position about SOPA and PIPA: "While we believe that online piracy by foreign websites is a serious problem that requires a serious legislative response, we will not support legislation that reduces freedom of expression, increases cybersecurity risk, or undermines the dynamic, innovative global Internet".

Tomorrow's blackout protest was scheduled to coincide with a House vote on SOPA, which has been postponed, leading to many cries of victory over the legislation. SOPA isn't dead, and last I checked the Senate still plans to vote on PIPA as scheduled. SOPA is on hold, not that the White House is really helping. The statement -- from Aneesh Chopra, US chief technology officer; Victoria Espinel, intellectual property enforcement coordinator; and Howard Schmidt, cybersecurity coordinator -- merely steps back from the proposed legislation.

"Moving forward, we will continue to work with Congress on a bipartisan basis on legislation that provides new tools needed in the global fight against piracy and counterfeiting, while vigorously defending an open Internet based on the values of free expression, privacy, security and innovation", they write. Meaning: They're backing off because of public pressure. More than 51,800 people signed petition: "VETO the SOPA bill and any other future bills that threaten to diminish the free flow of information".

The Go Daddy boycott shows just how impassioned are SOPA and PIPA opponents. My question: How far well they -- you -- go? Will you boycott sites that don't support the blackout? Facebook, Google, Tumblr and WordPress.com, for example -- I've seen nothing yet indicating blackouts planned for tomorrow. Imagine the impact if Bing and Google went dark for 12 hours on January 18.

Wikipedia will go dark, or so founder Jimmy Wales tweeted yesterday and then boasted: "This is going to be wow. I hope Wikipedia will melt phone systems in Washington on Wednesday. Tell everyone you know!" Wikipedia's official announcement released later. Reddit also will go dark, but not Twitter. Yesterday, CEO Dick Costolo made clear Twitter's blackout position in a couple of tweets: "Closing a global business in reaction to single-issue national politics is foolish" and "Not shutting down a service doesn't equal not taking the proper stance on an issue. We've been very clear about our stance".

Twitter has vocally opposed both bills, but Costolo's tweets, in response to others, don't reflect that. He put it in business perspective, which is more in the spirit of content providers, such as those in Hollywood, supporting SOPA and PIPA. More sensible response: "Twitter is a tool of free speech. Blackout would suppress it". That fits in less than 140-characters. :)

According to SOPA Strike, 10,000 sites have committed to the protest, but many, such as Google, don't plan an actual blackout. "At its core, this is a fight for freedom of speech, and the language in SOPA and PIPA have stepped over the line", Tiffiniy Cheng, Fight for the Future cofounder, asserts. "The SOPA Strike on Wednesday is the largest online protest that has ever happened. Several hundred million people, potentially more than one billion, will see messages about the dangers of censoring the Internet. That is absolutely unprecedented".

Will you take down your site to oppose SOPA? If you have a third-party hosted WordPress site, meaning not WordPress.com, there are many plug-ins available to automate the process. Please answer in comments. SOPA Strike provides a script you can to your site's theme to accomplish similar action.

Before anyone asks, I will take down my personal website from 8 am to 8 pm tomorrow -- using plugin "Go Dark". But, sadly, don't think it matters much since I haven't posted there in months (I've been too busy at BetaNews).

36 Responses to Will your website go dark to protest SOPA?