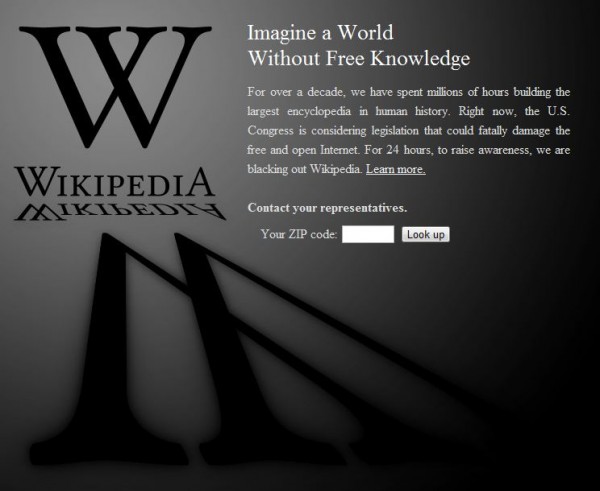 SOPA blackout day has arrived, and Wikipedia is going farther than the planned 12-hour protest -- from 8 am to 8 pm. The community encyclopedia is going down for twice as long. Today, we'll all learn just how important Wikipedia is to the Internet community. I find it a valuable resource as a journalist. Will you miss it?

Still, there is a nugget of information to be had from Wikipedia: About why the protest. Like many other sites today, the open encyclopedia stands against two pieces of legislation here in the United States: PROTECT IP Act (PIPA), introduced by senators in May, and October bill Stop Online Piracy Act (SOPA), introduced in the House. A delayed House vote, from December, was scheduled for today but postponed following last week's statement from the White House. SOPA is weakened but not done yet. SOPA Strike provides an excellent timeline for both bills. Senate vote is still scheduled for January 24.

"Wikipedia is protesting against SOPA and PIPA by blacking out the English Wikipedia for 24 hours, beginning at midnight January 18, Eastern Time", according to the "SOPA and PIPA -- Learn more" page. "Readers who come to English Wikipedia during the blackout will not be able to read the encyclopedia. Instead, you will see messages intended to raise awareness about SOPA and PIPA, encouraging you to share your views with your representatives, and with each other on social media".

Either bill would give the government broad powers to take down websites, seize domains and compel search engines from indexing these properties. Little more than a request from copyright holders is necessary. It's essentially guilty-until-proven-innocent legislation that would punish the many for the sins of the few, while disrupting the fundamental attributes that made the Internet so successful and empowered so many individuals or businesses to accomplish so much. (Review the bills: PIPA. SOPA.)

Wired UK's "SOPA 101" guide is one of the best primers posted in recent days, if those bills are too long (and wordy) for you.

These bills are efforts to stop copyright infringement committed by foreign web sites, but, in our opinion, they do so in a way that actually infringes free expression while harming the Internet. Detailed information about these bills can be found in the Stop Online Piracy Act and PROTECT IP Act articles on Wikipedia, which are available during the blackout. GovTrack lets you follow both bills through the legislative process: SOPA on this page, and PIPA on this one. The Electronic Frontier Foundation, a non-profit organization dedicated to advocating for the public interest in the digital realm, has summarized why these bills are simply unacceptable in a world that values an open, secure, and free Internet.

Wikipedia is by no means the only protester. SOPA Strike has compiled a long list of participants. But few sites are going as far as Wikipedia. For example, Google has blacked out its logo on the search page. Clicking the large rectangle leads to a "take action" page. Not surprisingly, Google opposes both bills. From its SOPA and PIPA info page:

Law-abiding US Internet companies would have to monitor everything users link to or upload or face the risk of time-consuming litigation...To make matters worse, SOPA and PIPA won’t even work. The censorship regulations written into these bills won’t shut down pirate sites. These sites will just change their addresses and continue their criminal activities, while law-abiding companies will suffer high penalties for breaches they can’t possibly control.

Imagine the impact -- the point to be made -- if Google went dark for even one hour to demonstrate how SOPA or PIPA could negatively affect businesses using the Internet. Of course, lawyers would line up to sue on behalf of lost business revenues. Eh? If Google went dark in protest.

The White House's position is the most perplexing around SOPA and PIPA. "While we believe that online piracy by foreign websites is a serious problem that requires a serious legislative response, we will not support legislation that reduces freedom of expression, increases cybersecurity risk, or undermines the dynamic, innovative global Internet", according to the statement, authored by Aneesh Chopra, US chief technology officer; Victoria Espinel, intellectual property enforcement coordinator; and Howard Schmidt, cybersecurity coordinator. There is stated position to "work with Congress on a bipartisan basis on legislation" that stops piracy and preserves freedom of speech.

As I stated yesterday, if the Obama Administration really opposes SOPA and PIPA, then prove it: Blackout Whitehouse.gov today. Show support for protecting Internet freedoms. Have a look, there's nothing supporting today's protest.