One in four Americans own an e-book reader or tablet 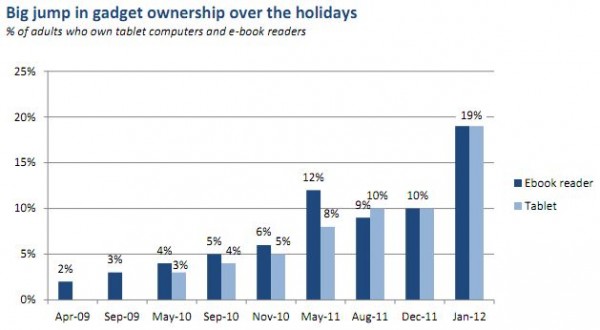 That's a dramatic change from just a few months ago and, perhaps not coincidentally, before new Nooks and Kindles lowered price of entry for both categories. Between December and January, the number of Americans owning one of the devices rose to 29 percent from 18 percent. During the same time period, the number owning a tablet rose to 19 percent from 10 percent, which is the same rise for e-book readers.

Pew Internet released the data earlier today, based on surveys conducted in mid December and early January. "These findings are striking because they come after a period from mid-2011 into the autumn in which there was not much change in the ownership of tablets and e-book readers", according to the report. "However, as the holiday gift-giving season approached, the marketplace for both devices dramatically shifted". As recently as August 9 percent of Americans owned e-book readers and 10 percent tablets.

Pew noted the holiday impact of Amazon and Barnes & Noble e-reader price cuts to below $100. During the same time period, Amazon released Kindle Fire, a $199 7-inch tablet. However, tablets typically cost considerably more, such as the popular iPad 2 -- between $499 and $829. As such, households with greater incomes were most likely to buy the devices. According to Pew:

The surge in ownership of tablet computers was especially notable among those with higher levels of education and those living in households earning more than $75,000. More than a third of those living in households earning more than $75,000 (36 percent) now own a tablet computer. And almost a third of those with college educations or higher (31 percent) own the devices. Additionally, those under age 50 saw a particularly significant leap in tablet ownership.

The story with the growth in e-book readers was somewhat different from the story with tablet computers. Ownership of e-readers among women grew more than among men. Those with more education and higher incomes also lead the pack when it comes to e-book ownership, but the gap between them and others isn’t as dramatic. For instance, 19 percent of those in households earning $30,000-$50,000 have e-book readers. They are 12 percentage points behind those in households earning $75,000 or more in e-book reader ownership. The gap between those income levels on tablet ownership is 20 percentage points.

Did you buy or receive an e-book reader or tablet during the holidays?