Should Microsoft release Office for iPad? 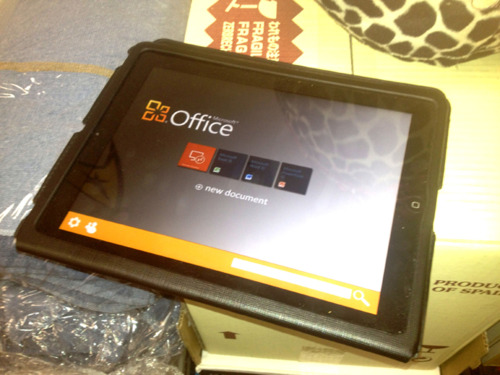 That's my question for you this Tuesday morning, following new rumors about Office for iPad and its imminent release. Over at The Daily, Matt Hickey insists Microsoft has nearly finished development and "the app will soon be submitted to Apple for approval". The software supposedly has capabilities from Excel, OneNote, PowerPoint and Word and inherits characteristics from Windows 8's Metro UI.

Whoa, can this really be a good idea, Office on iPad?

I'm unconvinced that Office for iPad is a good idea from a Windows platform perspective. Reports from numerous analyst firms -- Canalys, Gartner and IDC among them -- are clear: iPad hurts PC sales, which in turn impacts Windows. During fourth quarter (fiscal second for Microsoft), Windows and Windows Live division revenue declined by 6 percent year over year and profits even more; 11 percent. Microsoft blamed a hard drive shortage, but Mac sales rose to record numbers -- 5.2 million, up 26 percent year over year, while the broader PC market declined by 1.4 percent, according to Gartner). The reasons are more complex than Microsoft states, then, and iPad is high among them. So why in hell would Microsoft contribute to its own OS platform's decline?

Most IT mangers tell me the same thing: They make OS platform decisions based on applications. By offering Office on iPad, Microsoft makes adopting iPad an easier decision for many corporations, which also happen to make up Microsoft's core market base. So why give them incentive to deploy iPads that might take away PC sales today and Windows on ARM sales in the future? There are reasons. Among them:

1. Office as platform is another matter. Viewed from revenue and profit, the Business Division is more important to Microsoft than Windows and Windows Live. During calendar fourth quarter, Business division generated $6.28 billion revenue and $4.15 billion profit compared to Windows and Windows Live's $4.74 billion and $2.85 billion, respectively. That's a trend, not a one-off quarter. Office accounts for more than 90 percent of Business division revenues.

Additionally, Office is front end to many back-end Microsoft server products and to cloud services. Trickle down sales are huge.

2. Enterprises use Office and already are adopting iPad. According to a recent IDG Connect study, enterprise business or IT managers with iPads use their laptops less (54 percent) or have replaced notebooks with the tablets (16 percent). Office is the productivity app standard among corporate users, but software not available to them on iPad.

From customer retention and service perspectives, Microsoft should make Office available wherever these customers want to use it. Then there is the additional revenue potential from selling these customers yet another version of Office. Why sell once what you can sell again and again?

3. iPad doesn't really threaten Windows. That's a view common among BetaNews commenters and no doubt at Microsoft, too. The company offers Office for the Mac, which certainly helps Apple computer sales but hasn't (yet) caused Windows any real hurt.

Importance of the first two reasons is greater as well. By the way, I do see iPad taking away Windows PC sales, but what Microsoft managers presumably think matters more.

4. Office for Macintosh is hugely profitable and iPad can be, too. People often ask me why Microsoft offers Office on Mac, given Apple computers compete with Windows PCs. Simple answer: Microsoft makes money and could generate additional revenue on iPad. Apple shipped more than 15 million iPads in fourth quarter -- 55 million to date -- and none with Office, the most successful desktop productivity suite ever.

Why let Apple take all that cash to the bank with iWork apps? Pages, which Apple sells for $9.99, is the third top-grossing iPad app. Do the math. What if Microsoft offers Office on iPad for $39.96 ($9.99 per app) and one-quarter of the iPad install base upgrades? That's nearly $550 million in sales. Too bad Microsoft has to share 30 percent with Apple, eh?

5. Less is more. Microsoft has already announced plans to offer Office with Windows on ARM. Price is uncertain, and possibly free or cost invisible to the customer. Office on iPad would be good way to showcase what users can expect from Office for Windows on ARM -- and more. Surely Microsoft can offer more capabilities and different, if not better, user experience. Microsoft reaps revenue rewards today from iPad while preparing something similar but better for Windows later.

Okay, I've made a case for why Office on iPad could make sense. There remains your answer to the question: Should Microsoft release Office for iPad?

41 Responses to Should Microsoft release Office for iPad?