Who is downloading Windows 8 Consumer Preview? You are! 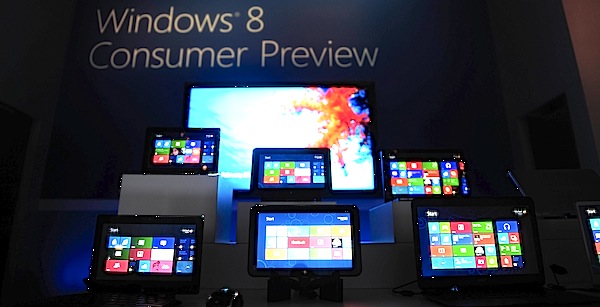 Yesterday I asked: "Will you try Windows 8 Consumer Preview?" It's here, and many of you are rip-roaring ready.

Windows 8 is Microsoft's most important OS release since XP and quite possible ever. The company is reinventing Windows for the cloud-connected device era. There is major emphasis on mobility and syncing you across devices. The new Metro UI revives and fulfills Microsoft's Active Desktop concept attempted in the 1990s and abandoned by Windows XP's launch in October 2001.

Not all BetaNews readers getting the Windows 8 preview are excited about Metro. "I will be upgrading the Developer Preview machine to the latest version", says Brian Butterworth. "As I will be using it with a keyboard and mouse I will be looking forward to improvements on that front. I still can't see me actually liking Metro, but I really want to be sure".

Commenter carigis is "not really into the look of metro either".

He has advice that should be good for Butterworth and carigis:

Metro Start takes a little getting used to, but even if used as just a place to find and launch programs (which I rarely used the old Start menu for) it's a significant improvement. Since I use menus on the taskbar (folder on desktop/desktop taskbar toolbar) for launching my most commonly used apps though, I rarely even see the Metro screen except at start up. I suspect that I will use it more when there are better apps available from the newly opened store however.

Ayan Sarkar "can't wait". Oh yeah? So do you have the software already? James Portelli: "Can't wait to get my hands on Windows 8 Consumer Preview!!" Is it in your hands, James?

Robert_IT is "blowing away three desktop boxes in my home lab and loading Windows 8 on all three. Might even splurge on a touch screen monitor or buy a Samsung Slate if I like it enough. If it will run on my wife's MAC I would install it there as well just to piss her off. LMAO".

carigis "will try" the Consumer Preview "although the Developer Preview only lasted about 24 hours on my pc when I tried that.. I found the interface tedious, having to keep going into the Metro screen with the desktop basically being an app, not having the usual start button...We will see if it lasts more then a day".

Microsoft offers two options for previewing the software -- one in a virtual machine. That's John Crane's choice. "I plan on installing it and running is as a guest OS using Virtual Box, running on a 64 bit Windows 7 machine".

TomL_12953 answers: "Sure I will. I doubt I'll deploy it, though, until it's the only choice on new PCs. My users already complain when their icons get rearranged. Can you imagine the outcry with a whole new paradigm? I'll probably install it in VirtualBox on people's PCs and let them play with it for a while and get used to it.

Khurram Javed: "Definitely installing it on my-not-so-high-end PC and my Mom's laptop as well ;)".

S-o-o-o-o have you got it already?

20 Responses to Who is downloading Windows 8 Consumer Preview? You are!