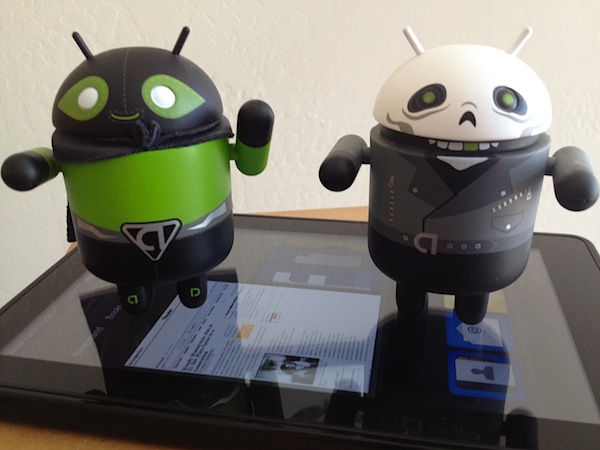 Rumors about Google's forthcoming tablet are increasing, which astounds me -- as they portray this as something new. Hey, Google already formally stated it would produce an Android tablet. The rumormongers have got the reasons wrong, too. Google isn't gunning for Apple but Amazon.

The retail giant is by far the biggest competitive threat standing before Android today. Amazon has customized Android, released its own hardware, ditched Google's browser for its own Silk, established a viable app store alternative to Google Play and created a curated user experience that rivals Apple's. In just one quarter, Amazon's Kindle Fire jumped ahead of all other Android tablets, putting it second to iPad. Every Kindle Fire sold is one more brick in the wall blocking the success of the broader Android ecosystem.

Amazon announced $199 Kindle Fire in late September 2011 and started selling the media tablet in early November. According to IDC, the retailer shipped 4.7 million Kindle Fires during Q4, jumping to second place market share during the launch quarter. Amazon pushed Samsung down to third place. The Android tablet makers had 16.8 percent and 5.8 percent share, respectively, with Samsung growing from 5.5 percent in third quarter.

Something else: Kindle Fire is largely responsible for Android market share gains -- to 44.6 percent during fourth quarter, up from 32.3 percent three months earlier. During Q4 the two leading tablet operating systems were iOS and Amazon's Android, with combined share of 71.5 percent. Let me restate that: Not Android, but Amazon Android.

Google's tablet has got to get past Kindle Fire before ever touching iPad, which had 54.7 percent market share during fourth quarter, according to IDC.

Amazon's $199 is focus of Google tablet rumors, for good reason. Our polls show that most people don't want to spend more. But there is much more to Kindle Fire's success than price. There are other compelling $199 tablets, such as Lenovo's Ideapad A1, that trail far behind. Price is just table stakes. iPad competitors need more than lower-cost tablets to win.

What Amazon does right, like Apple, that Google must do: Sell a lifestyle. Amazon prioritizes features and pricing that matter for living one digital lifestyle around its cloud-connected services, rather than offering the latest, hardware and software. Like Apple, Amazon offers a stack of content and services. Kindle Fire isn't about techie features but a digital lifestyle around Amazon products and services.

Amazon is creating a curated experience that matches Apple's and, in some respects, exceeds it. Consumers can buy Kindle books for Fire, but read them on their iPhone, Android handset or other device. Amazon allows movies and music on Kindle Fire or other devices. From Apple it's just devices supporting iTunes Store. People buying into the Amazon lifestyle get Kindle Fire plus something else. That's an added benefit not available from Apple or other Android tablet vendors -- okay, Sony is closest.

Amazon's continued success is good for driving up Android shipments against iPad, but it's bad broadly. Kindle Fire benefits Amazon and its customers willing to buy into the curated experience but at the expense of the larger Android ecosystem.

Amazon's objectives are contrary to Google's. For example, if I type the web address to Google's Android Market into the Silk browser on my wife's Kindle Fire, Amazon's Android app store opens instead. On other Android tablets, Google Play is default but there is option to sideload from other stores, like Amazon's.

Google will bring a large arsenal to bear on Amazon:

1. The Google brand, which like Apple's and Amazon's is well-known and highly regarded. Branding and perception are everything in business.

3. Ice Cream Sandwich. Why wouldn't Google offer its newest Android version and in process finally jumpstart adoption. Google's partners are dragging their asses getting their devices to Android 4.0. As of April 2, ICS accounted for just 2.9 percent of all Android devices, which means cell phones, too.

4. Curated digital lifestyle apps. The Android ecosystem should prepare for the coming Google Android stack to rival Amazon's and to compete with other partners. About a month ago, the search and information giant renamed Android Market Google Play and last week prominently placed a link on the dark bar across services pages like Gmail and Plus.

The name change emphasizes Google over Android as dominant brand and foreshadows the curated approach to come. Like Amazon and Apple, Google offers ebooks, movies and music at its store. Then there is the broader digital lifestyle supported by services like search and maps.

5. Integration. Google is in process of cross-integrating all its products and services, many of which are tightly tied to Android and most prominently and deeply in Ice Cream Sandwich. Already, Google integration pays off big on smartphones. According to comScore's "2012 Mobile Future in Focus" report:

What Google needs now is a successful tablet running ICS.

6. Reference Design. In January 2010, Google unveiled the Nexus One smartphone, which it sold direct to customers. Many bloggers and journalists wrongly wrote that Google charted new retail waters by selling direct, missing the point: Google wasn't going into retail sales but establishing a reference design for manufacturers and developers. From that perspective, Google executed brilliantly with N1 and continued with December release of the Samsung-made Nexus S and the Galaxy Nexus a year later.

A Google tablet as reference design is more important now than when I called for it in January 2011. Because of Amazon Android. Google can rally developers to a pure Android tablet running the newest OS version, while leading way for hardware partners to follow.

If Google fails, there will be two Androids competing against iOS tablets. What's that saying about a house divided?