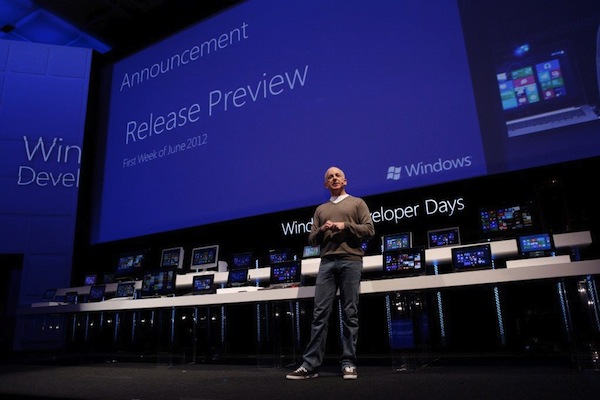 While I was sleeping -- and perhaps you, too -- Microsoft announced that one more public Windows 8 test build will come before the code is gold. Right now, Windows 8 Release Preview will be available the first week of June. What? Microsoft no longer calls these things release candidates? Timing is tight, unless Windows & Windows Live president Steven Sinofsky and his team exude absolute confidence they can finalize code in time for autumn launch.

It's a narrow path from early June release candidate to August release to manufacturing to October launch, unless there are no major changes from the Consumer Preview released in February or last-minute show-stopping bugs. You can read this as sign that Windows 8 is rock-solid ready and that Sinofsky and team are absolutely certain about the operating system's readiness or that they need to stretch out the time as long as possible. The Consumer Preview came at the last possible milestone for Microsoft to ship this year, and the next one follows similar tight track.

As I wrote nearly three months ago you can expect Windows 8 in October, or not at all this year. To get there, RTM must come no later than end of August.

By measure of Windows 7, its successor trails considerably behind development track for October, which is the last month to launch so that new PCs fill the channel before holiday sales begin in earnest. Microsoft released Windows 7 Beta 1 on Jan. 9, 2009. By measure of that milestone in 2012, Windows 8 Consumer Preview came about seven weeks later. Typically, Microsoft would have offered a second Windows 7 beta but went right to release candidate, on April 30, 2009. Windows 8 needs similar accelerated track to be ready for the holidays. Instead, we have late-April announcement about June release candidate.

Windows 7 RTM: July 22, 2009, about six weeks from release candidate. Early June is even longer between public preview and RC for Windows 8. Windows 7 launched on Oct. 22, 2009 -- or three months after RTM. By that measure, Windows 8 gold code should come in late July to make October release.

OEMs need time to test new Windows versions, put together software images and ship PCs into the channel. Even in this era of real-time manufacturing, retail remains the primary sales channel. PC manufacturers still need a good six weeks from final Windows code's release to manufacturing to actual launch -- a little longer to get PCs in stores. Ideally, then, Windows 8 must RTM by end of August to make October launch, which is best timeframe assuring the channel is stocked for Black Friday.

Problem: Windows 8 brings dramatic changes compared to its predecessor, particularly because of the aforementioned user interface changes -- touch-oriented Metro and legacy desktop, which nixes the Start Button and Menu and adds the Office Ribbon throughout. Customers, developers and hardware partners will have to adapt to these changes. The more time the better, and they may not have it.

The good news: Windows 8's development will only trail its predecessor's by about 5 weeks if Microsoft meets the early June milestone. That's a refreshing sign for October release, but bodes ill for customers hoping for major changes, particularly around the Metro UI. Reaction among BetaNews readers is largely negative, for example. It's now unlikely that changes will come, with such a late release candidate. If you don't like Metro, stick with Windows 7 or get used to it.

I believe that Microsoft can ship Windows 8 in time for the holidays. But the less time the ecosystem has to prepare the less likely truly exciting hardware designs and Metro-supporting applications will be ready for the holidays.

Still, there's sense to what I hope is going on at Microsoft. In the writing business, there are deadlines. A story is ready when the deadline comes, regardless of what more the editor or writer might want to change. That's good analogy for software development. The Windows ecosystem needs the operating system ready for holiday PCs. Windows 8 is ready enough when the deadline to ship comes -- and that's whatever Microsoft and partners decide when its to be, not predecessor operating systems.

Something else: Microsoft's announcement timing is brilliant, and I hope by design. Apple announces first calendar quarter earnings today. Today's Windows 8 announcement should silence some of the ridiculous pre-Apple earnings blathering that floods the InterWebs. To Steven Sinofsky, I offer thanks for dulling the Apple noise -- even for just a few hours.