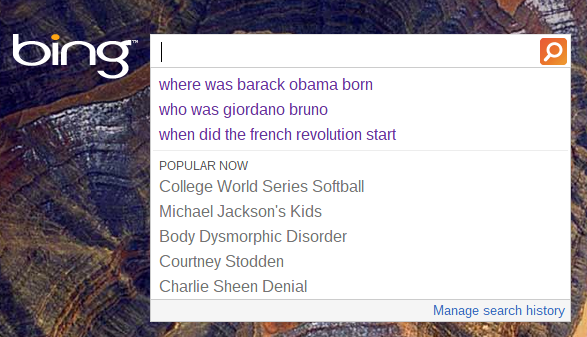 For as long as Microsoft has offered a search engine, CEO Steve Ballmer or one of his minions has talked about the goal of providing answers to real questions rather than forcing people to use keywords. The success of social search service Quora or Yahoo Answers shows how much people simply want to ask. Bing and Google handle questions much better today than ever, but often the answers come unqualified and without the depth or authority of, say, a peer-reviewed encyclopedia. Apple tries with Siri on iPhone, with Wolfram Alpha behind it. But we all know that, for now, Siri sucks.

Today, Microsoft seized the answer search initiative, by incorporating Encyclopedia Britannica into Bing results. Sure Google places Wikipedia front and center, but Britannica is an undisputed, reliable authority -- well for anyone old enough to have owned a set of the books. Ask a question. "The answer provides a quick overview of the subject, a thumbnail image, and useful facts and figures making it easier than ever to get trusted content in search", Franco Salvetti, Bing principal development lead, explains. "We also pull in direct links to other trusted sources".

Well, hell, I just have to try it out. Question: "When did the French Revolution start?" Uh-oh, Wikipedia, LoveToKNow and WikiAnswers are top results. No Britannica.

Since it's still such a controversial topic and an election year, I ask: "Where was Barack Obama born?" Top result: BarackObama.com, followed by Wikipedia and breitbart.com. Salvetti uses "Giordano Bruno" as example of Bing Britannica in action. So I ask who he was. Again, there's no Britannica I can see, but Wikipedia, Catholic Encylopedia and infidels.org as top results.

What about Google? To question "Who was Giordano Bruno?", Britannica is third result, but nowhere as pop-out pretty as Salvetti promises from Bing. To "Where was Barack Obama born?" Google puts "Honolulu" at top of page with link to five sources -- none of them Britannica.

So maybe this Britannica thing is a work progress. I'd ask Siri the same questions, but my iPhone 4S-using daughter is away on a school trip.

5 Responses to Get back, Siri, Bing Britannica answers questions