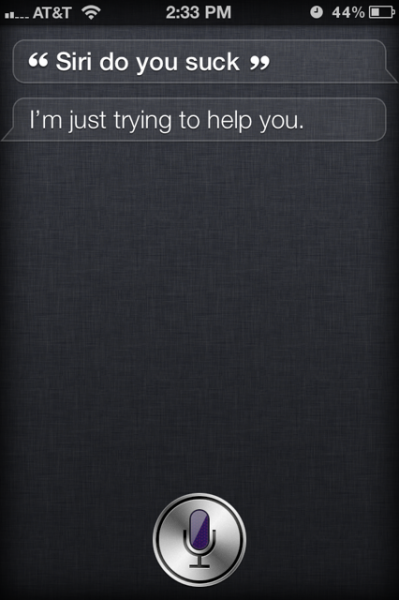 Yesterday, during the annual D conference, Apple CEO Tim Cook said that the company is "doubling down" on Siri. Improvements are coming -- promised without admission of problems, although complaints about them are many. Then there's the lawsuit claiming Siri fails to meet advertised capabilities. You could interpret Cook's promise as concession Siri sucks or that Apple is preparing to take on Google in search. I see it both ways.

Five years ago, Apple supercharged the smartphone category with a more natural user interface. Suddenly, there was a new way to interact with a mobile phone that was seemingly magical. Humanness made the original iPhone stand apart from all competitors, and Apple used a variety of sensors to imbue the quality. Touch, and its intimacy, and the way the handset responded to your proximity gave it the human quality. But Apple has done little since, other than Siri, which does add a little more humanness to iPhone 4S. She adds personality and extends the mobile user interface to another more important than touch: Voice. Problem: There's something inhuman about Siri's often frustrating responses to questions.

"I've never had luck with her for anything", my 17 year-old daughter told me this morning about Siri. She's an avid, and I would say addicted, iPhone user. "When I ask for directions the distance is always wrong. She will say it's 2.8 miles when it's really 4.3 miles. It's farther away".

Google "Siri sucks" and you'll read more of the same. The forum discussions are the most revealing about how much trouble so many people have with Siri.

Jordan Crook's November 2011 post "Siri, why are you so overwhelming?" caught my attention for its plaintive, self-accusing quality. What's that concept they teach in Psychology 101 about the tendency to blame oneself when abused by someone else? "Siri isn’t perfect, and perfect is what I expected", Crook writes in a missive about dissatisfaction. But there is excuse through self blame, which had better be facetious: "Siri misunderstands me all the time. Maybe I mumble, or maybe it’s because I’m talking to her like I would talk to any human personal assistant...That’s the thing about the disappointment Siri brings with her -- in the end it’s my fault".

Jordan, it's not your fault. I used Siri, too, and found her to be about as reliable as starting an old car in a Maine winter. Some days the engine turns over, many more it doesn't.

Twice before today I conducted comparative tests -- my daughter's iPhone 4S against a Google phone: "Galaxy Nexus shames iPhone 4S Siri" and "Siri humbled my Android", which it didn't, but I wrote the headline before conducting the tests and decided to keep it.

Before my daughter darted off to school this morning, I requested to borrow her iPhone 4S for 5 minutes. She grudgingly gave it up (My God, what if she missed a text!). I asked Siri three questions also put to Galaxy Nexus HSPA+:

How about Earth, as current location, bitch?

Galaxy Nexus responds with no soothing (dare I say mocking) Siri voice or pretty white text against dark grey. But the Android delivers answers I can use, from Google search pages:

Later, since my daughter had gone to school, I asked colleague Ed Oswald to ask another question. "Siri, do you suck?" Her answer: "I'm just trying to help you". 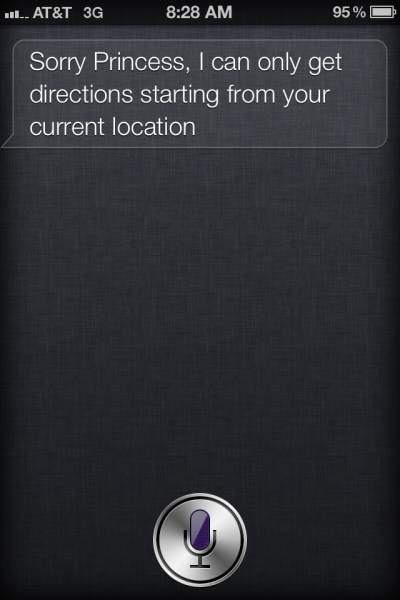 Voice is Your Bond

Apple is right to focus on voice, which is a much more natural user interface for a mobile device than touch. More importantly, if Siri could actually get the answers right, Apple would have a powerful competitive weapon to blast away Google mobile search share. There, Cook's "doubling down" is as much, if not more, about transforming the mobile search experience, and that means butting heads with Google. Better: Someday replacing Google with Siri search on iOS devices. But that's not viable as long as Siri sucks.

Hype is part of the problem -- Siri getting too much of it and Google's unnamed voice features not getting enough of it. Apple bought Siri in early 2010 and tacked it onto iPhone 4S in late 2011. Google has done work on voice capabilities longer, and it shows. My colleague Tim Conneally took a first look at Google's voice-recognition engine in June 2009. By January 2010, when Nexus One launched, Google hyped the phone's surprisingly strong voice capabilities.

I explained then: "Jack Consumer can speak 'Pizza Hut' and the phone will use GPS to find the nearest restaurant and then offer turn-by-turn vocal navigation on how to get there". Say, doesn't that ring familiar, like something you might have seen or heard about Siri? More: "Better still, Google has enabled voice capabilities for all text fields in Android 2.1. Who needs a keyboard when he or she can speak to text or twitter? Apple made iPhone something magical by the way it responds to touch. Google is taking the input and interaction hands free, which is even better".

All that came long before Siri arrived in beta -- where it still is today, as Apple often observes when excusing performance. To that I say: If it's still beta and not really ready for the masses, why are you so aggressively marketing Siri, Apple? There are three -- or is it four -- new TV commercials this month. Answer: Apple is pulling a 1990's Microsoft; release a product before it's really ready so as to gain market share against a competitor. Apple knows that voice is the future of mobile user interfaces.

But such strategy risks ticking off customers, unless like Crook they blame themselves. Meanwhile Apple glows in the bask of presumed innovation for technology paid for and following behind Google advances.

What's that saying? No risk, no rewards. If Apple can conquer voice by iterating improvements and truly match or even exceed Google in mobile search, the game changes. Apple changes the rules like it did in so many other product categories -- digital content creation software, app stores, MP3/video players, media playback software, smartphones and tablets, among others. Cook and Company should be "doubling down". Whomever wins mobile search takes the prize.