Google+ wins me over 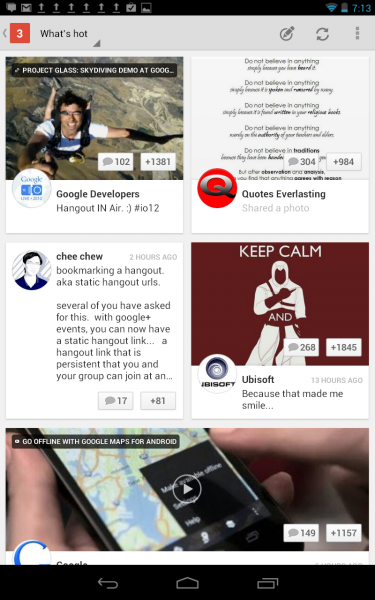 “Bigger is always better” is an expression we’ve become accustomed to over the years and while counter-intuitive it best describes everything that’s wrong with Facebook. The most popular social networking website is the best example of size losing over quality. Are we really satisfied with our Internet alter-ego living in the largest environment or the better one?

The American Customer Satisfaction Index has revealed rather interesting user satisfaction results on Facebook and Google+. Satisfaction is the word of the day and Facebook users don’t really get it, which is curious because there are more than 900 million of them. The satisfaction index rating decreased from 66 in 2011 to 61 in 2012. That's out of 100 points. Surely CEO Mark Zuckerberg should be concerned. Why? The sun shines brighter on Google+, which ranks 78 its first time on the index, equal to Wikipedia.

It's easy to see why some people don’t really like Facebook, which is quite funny because how they popularized "Like". The introduction of Timeline stirred the waters in the Facebook community with many disliking the idea (so much for "Like"). I've read many posts from people wanting to change back from Timeline. I guess you can’t force people to like a concept they didn’t ask for or need. The fact that it was another in a long line of forced upgrades doesn't help with user satisfaction at all.

I have used Facebook since October 2010 and have witnessed a degradation of user experience since. Perhaps business model is part of the problem. Facebook's main source of revenue is advertising and the loads of information the social network seeks to unearth for ad partners, and those developing apps, too. Let’s face it, Facebook ads aren’t our happy time, nor the clutter and complexity created to squeeze out more personal info.

One thing that baffles me every day is the number of Facebook app posts seen whenever I scroll through the newsfeed. It’s like every app wants to tell me how good it is. If I want to play a game I will, but I simply don’t want to be reminded of its existence every time I want to read some real news. To me they're far more annoying than Facebook ads.

What doesn’t seem to go away and is quite sad actually: The number of offending comments, be they sexual, racist, etc. We live in a modern world that’s supposed to be better than it was 50 years ago, but plenty of users don’t realize that other people can read the stupid things they post. Facebook seems more concerned about being popular than taking action against offenders.

There are plenty of reasons as to why people don’t enjoy Facebok more over Google+, but only one reason for them staying: friends.

By comparison, I joined Google+ in July last year, soon after its introduction. I started by registering just to see what all the fuss was about, since it was touted as a Facebook killer with many new concepts being implemented, such as the idea of Circles. We all know that didn’t happen, but something else did: people enjoy Google+.

I quite like the concept of Circles and use them every day to keep tabs on what’s new on Google+. Compared to the idea of the "List" Facebook uses, this is miles away in terms of flexibility and what’s more important: Circles are rooted into the social network, while the List looks like an afterthought. Having the possibility to not have everyone in the same pot makes a difference and it actually makes for a better user experience.

Trending on Google+ is a brilliant idea from my perspective, and it’s a great way to make your posts popular while at the same time having the ability to connect similar content. I’ve used it many times, particularly since contributing to BetaNews. I find the tool very useful in getting feedback on my articles as well as reaching a wider audience. Searching through millions or billions of posts makes a huge difference and trending makes it easier.

Posting with hash tags makes sense, too. You’re making your posts and your content better categorized and with the ability to search through them, which can make your ideas more powerful than in any other social network.

I’d like to compare it with Facebook’s search ability, but they obviously haven’t bothered. And why should they? It’s not like it can be popular. Search should be a given in 2012. It’s not 1990 anymore, and when we’re talking about hundreds of friends and millions of posts.

At Google I/O +Vic Gundotra said that 250 million people use Google+, with 150 million as active monthly users, with half of those using Google+ each day. It all sounds like it is taking off quite well and I’m only wondering what’s stopping everyone from deleting their Facebook account and joining Google’s social network.

Google+ wins the war against Facebook for other reasons, like the minimalistic design, which is elegant and complex without feeling cluttered. Features like searching, tagging posts and Circles are really enjoyable for me and make for a true social orientation rather than profit at any cost.

Which is the Better One?

There are plenty more reasons why I don’t much like Facebook but there’s only one reason for me to still use it: friends. And that’s the key to Facebook’s existence. People don’t switch overnight and a massive move from one network to another is impossible. Mark Zuckerberg started at a time when all other social networks weren’t as good and didn’t focus as much on relationships. Right now 900 million users are inertia for it. As long as people don’t search for a better alternative they’re going to be stuck with the clutter that is Facebook.

On the other hand, Google+ is a totally different animal compared to Facebook and one that's far more evolved. Comparing the user experience on Google+ with the one on Facebook isn’t like comparing apples to oranges, because apples aren’t definitely better than oranges, but Google+ sure is the more enjoyable social network.

25 Responses to Google+ wins me over