Android 4.0 Ice Cream Sandwich is growing, but Gingerbread still rules them all 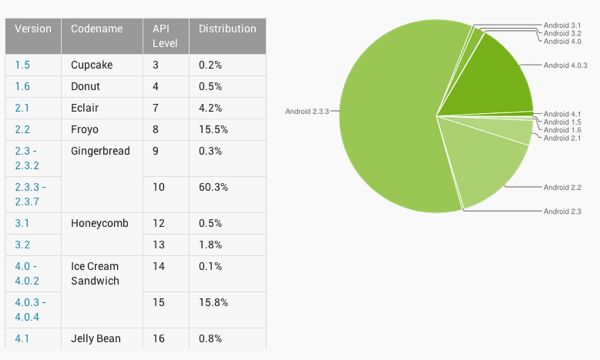 As manufacturers release upgrades to Android 4.0, and people buy Ice Cream Sandwich-based smartphones, Android 4.0 Ice Cream Sandwich (ICS) accounts for 15.9 percent market share of the Android operating system family, which is the highest distribution level since its introduction in October 2011. This statistic is provided by Google based upon the number of devices accessing Google Play within a 14-day period up to August 1. Net Applications rates ICS at an even higher percentage of the Android market.

How about Jelly Bean? The latest Android build accounts for just 0.8 percent of Android's market after its release in June 2012 at Google I/O. While Google released the Nexus 7 with Jelly Bean and updated the Google Nexus smartphone to it as well, major manufacturers haven’t yet released upgrades to Jelly Bean. For instance, HTC confirmed the upgrade, but didn’t provide a release date.

The dinosaur of the Android family remains Gingerbread, which currently owns 60.6 percent distribution in the Android family, and it clearly represents the most significant Android version to date, with devices like the original Samsung Galaxy S locked on Gingerbread. For instance the Sony Xperia S was launched with Android 2.3 in February 2012, the Motorola DROID RAZR MAXX and RAZR MAXX have also been released with Gingerbread as well with updates to ICS coming since late May or early June; manufacturers are still releasing Gingerbread smartphones to this day like the Sony Xperia Go, Samsung Galaxy Beam, Samsung Galaxy Ace 2, even if more than a year and a half has passed since its release in December 2010.

Other newly released devices contribute to Gingerbread’s market share, but 60.6 percent represents the majority of Android operating systems, and in December 2012 two years will have passed since its introduction, making for an alarmingly high market share considering the fragmentation issues it brings up.

Android 2.2 Froyo was released in May 2010, more than two years ago, and Android 4.0 Ice Cream Sandwhich barely surpassed it, with just 0.4 percentage points which is a relatively low increase overall. Older Android devices are using Froyo and its market share will slowly decrease even further, based on Google’s statistics.

At the same time as Froyo loses market  share, Gingerbread stays relatively constant. Ice Cream Sandwich appears to take away Froyo’s market share, not Gingerbread’s. It will most likely mean that Android 2.3 and Android 4.0 will be the two dominant Android versions in the future.

Net Applications released their Android market share statistics for July 2012 as well, and their numbers slightly differ from what Google provided, thanks to the different ways the two companies measure market share.

Android 4.0 Ice Cream Sandwich is rated at 17.56 market share, which is 1.66 percentage points higher than the 15.9 percent stated by Google, which only measured the distribution level for Android over a 14-day period before August 1, while Net Applications measured for the entire month of July.

Net Applications rates Android 4.1 Jelly Bean lower than Google does, at just 0.35 percent market share. Google claims it made up 0.8 percent. Android 2.3 Gingerbread is again at a lower 56.62 percent, compared to the 60.6 percent provided by Google. Android 2.2 Froyo shares the same fate at 12.02 percent compared to 15.5 percent according to Google.

Android 4.1 Jelly Bean will take off when manufacturers will release upgrades and new devices as well, but until then Gingerbread will still run the show and ICS will take away Froyo’s market share if we’re to judge by the trend shown by Google. With new devices launched with Android 4.0 Ice Cream Sandwich (like Galaxy S III and HTC One X) its market share will rise with the sales, but Android 2.3 Gingerbread will still be the dominant Android operating system for some time. Ice Cream Sandwich and Jelly Bean, take your best shot!

4 Responses to Android 4.0 Ice Cream Sandwich is growing, but Gingerbread still rules them all