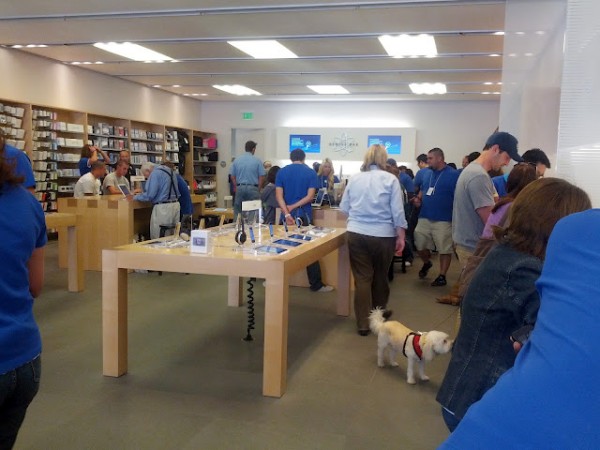 The Apple Store staffing scandal surprises me -- if it can be called that. Rumored layoffs, hours cutbacks and hiring freezes led to an immediate response from Apple, that seemingly puts new retail chief John Browett in a tight spot. As a former Apple customer and someone who still frequents the stores for reporting purposes, I can see why Browett would want to make changes. The ratio of employees to customers is embarrassing. There's kill and way overkill. What's that saying about having too much of a good thing?

The company had reportedly started laying off employees in the United Kingdom, which didn't strike me as odd with the Olympics ending and the reasonable scenario of releasing temporary employees added for the event. Stories showed up in my RSS feeds earlier in the week. I ignored them, as I do most Apple rumors. But on Wednesday, I saw Gary Allen's analysis of Apple Store profit goals behind the rumored staffing changes, which made much more sense of them. Allen has an excellent track record reporting about Apple Store. Perhaps Apple thought so, too. Official response came yesterday.

Dow Jones received this statement from Apple spokesperson Kristin Huguet: "Making these changes was a mistake and the changes are being reversed. Our employees are our most important asset and the ones who provide the world-class service our customers deserve". What the frak?

As a long-time Apple reporter, I can emphatically assert that the company rarely publicly admits to doing anything wrong. Sure, there are examples -- iPhone 4 Death Grip being among the most notable in recent years. But I can't recall another recent example of an official response this fast that by being given essentially impales a senior executive. I wonder why, particularly with Dow Jones reporter Ian Sherr claiming Browett "instructed leadership teams to tell employees, 'We messed up'". He cites anonymous sources, which in context of official statement usually means given by the company on background. Browett is in the doghouse.

Cult of personality is part of the problem, playing off Apple's obsession with brand image (hey, just look to the marketing and how the company rarely admits fault). Several prominent Apple bloggers are mini-Steve Jobs, in the sense they have large cultish followings and influence. Among them: Jim Dalrymple and John Gruber, who this week both stepped down from their Apple fan soapboxes to offer unusually pointed criticism.

Among Apple Store Gruberisms, referring to Browett: "It’s hard to conclude anything other than that Apple made a terrible decision hiring him". Dalrymple:

This has the stench of a man looking to make a name for himself, not someone that’s doing what’s best for Apple or more importantly, its customers. To take one of the most heralded retail experiences in the world and gut it, stripping it of everything that makes an Apple store what it is, just doesn’t make sense.

It seems to me that Browett is trying to make Apple retail just like every other retail store on the planet. A few employees trying to satisfy an ever growing consumer base. That formula doesn’t work...Let’s hope Apple doesn’t let Browett make any more crazy decisions.

Browett's problem: He's not Ron Johnson, the man responsible for building Apple's hugely successful retail chain. In a company with cults of personalities, where major bloggers (or reporters) either buy into the cults of personalities or have their own, Browett has an immediate image problem. Anything he does is compared to Johnson's success. Google "Apple Store, John Browett" for yourself and see the uncharacteristically negative-tone stories from the Apple Fanclub of bloggers, reporters and other writers. I'm not surprised that Apple might step forward with criticism coming from Allen, Dalrymple and Gruber.

"We opened a total of nine new stores in the quarter and exited the quarter with 372 stores, including 123 stores outside the United States. With an average of 367 stores opened, average revenue per store was $11.1 million compared to $10.8 million in the year-ago quarter", Apple CFO Peter Oppenheimer told financial analysts last month.

Retail is a tough business anywhere, with employees typically being the largest expense (the Bureau of Labor Statistics offers some insight). From that $4.1 billion, revenue Apple Store generated just $862 million operating income, up from $802 million in calendar second quarter 2011, making retail among the company's lowest-margin operations. Allen offers excellent analysis of the costs and number of retail employees, which I won't repeat here. His post is worth your time. Allen claims Browett sought to increase profit margins by 22 percent -- and that's a figure I cannot corroborate.

Cutting back hours and number of full-time employees is good way to start trimming the fat, particularly if is too much staff. My, oh, my, Apple sure has an over-abundance of blue-shirt wearing employees at my two local Apple Stores -- at Fashion Valley and UTC. How about yours? I snapped the photo up top on June 9 at UTC. There are 14 visible Apple Store staffers and 10 customers.

I posted to Google+: "I'm at Apple Store UTC, where the employee-to-shopper ratio shames that of teachers to students at most schools. The quick pic doesn't enough show the amazing number of blue shirts". Again, on July 29: "I am at Apple Store UTC looking at the back-to-school buying crowd. I count 20 blue shirts and 30 customers (excluding little kids). Hell of a ratio. If only public schools had as many teachers to students". The ratio is consistently similar at Fashion Valley, but not as immediately obvious because the store is so much larger.

Perhaps being a tourist town, San Diego is unusual -- although I don't see anything close to this kind of staffing in any other retail chain. You tell me, from your own experience: Is Apple Store overstaffed? I'm put off by the number of blue shirts, and as a shopper I find them a nuisance to navigate around. The huge ratio of employees to shoppers gives a bad impression -- like there's something wrong with the operation. Well, it does for me. You?

I suspect that Browett has the right idea. Fewer employees would improve the overall customer shopping experience and increase profit margins. Give the man a chance.

19 Responses to Is Apple Store overstaffed?