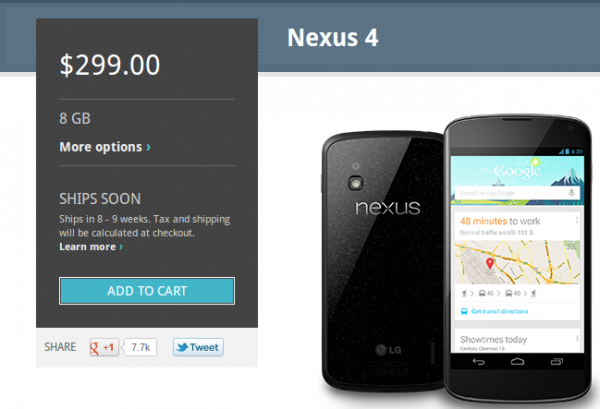 Nexus 4 is no longer "sold out" at Google Play, and I can't help but laugh at the store's idea of "ships soon". That's "8-9 weeks" for the $299 model. Exactly how is that not sold out? Basically, Google throws out hope to the hopeless. Still, from a marketing perspective, long wait is better than telling potential buyers the product is out of stock. Meanwhile, people place orders and get somewhere in the long queue.

Yesterday, Google resumed Nexus 4 sales after selling out within hours of taking orders on October 13. Like that day, the search giant struggled to take orders, with many buyers watching orders be cancelled in the shopping cart. But the persistent succeeded, often after several hours effort. Today's wait time is more about when devices ship rather than ordering them. Expect "4-5 weeks" on the 16GB model.

Yesterday, Armando Ferreira posted to Google+: "5 hours later I finally got a Nexus 4!"

In comments to Ferreira, George Remington tells harrowing tale of retail woes: "Four different times I had a Nex 4 16GB in my account and when I hit proceed it would either disappear and say oops there was an error processing your order or due to high traffic we cannot process your order. Hell I just dumped it all and I will get one when they have time to sell one. I do not need one that bad". Later success: "Hell just went and gave it a try and it went right threw. Only took 20 seconds to get one".﻿

As I've expressed before, Nexus 4 is textbook retail case study about how not launch a hotly-desired new product, particularly during the holidays. Still, there's something to be said to "ships soon" over "sold out", so that people can actually place orders. Google Play doesn't charge credit cards until products ship, buyers give up little but get a place in line. Meanwhile, Google possibly prevents someone wanting Nexus 4 losing patience and ordering a competing phone.

"The reason I was upset last time was because Google was no longer taking orders", Ferreira. "That doesn't seem to be the case this time around. I don't mind waiting, as you can see as of right now the wait time is over 8 weeks for the 8GB model. That's okay with me knowing even if I had to wait 3 months for it as long as I know that my order went through".

Again, there's the wisdom behind putting long delivery times under "ships soon" rather than posting "sold out" and taking no orders at all.

But some people would like to pay now. "I'd prefer they took my money outta my account so I don't accidentally spend it on other things", Josiah Spackman expresses.

If you are considering Nexus 4, or ordered but not received the device, please read my first-impressions review.