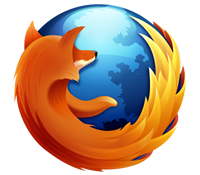 Mozilla has launched Firefox 18.0 FINAL, the latest stable build of its open-source, cross-platform web browser. Version 18 debuts a new, faster JavaScript engine to improve page loading times by up to 26 per cent over the previous version. Mac users will also be pleased to learn that version 18 finally includes full Retina-display support on Macs running OS X 10.7 (Lion) or later.

At the same time, Mozilla is readying the final release of Thunderbird 18, a minor update to its email messaging tool. The most notable new feature here will be support for zoom in the compose window.

Firefox 18’s new JavaScript engine, codenamed IonMonkey, should help boost site loading times. According to Mozilla’s own benchmarks, this could lead to improvements of around 25 per cent over previous releases.

Firefox 18 also implements basic support for WebRTC, which will eventually allow compatible browsers to perform certain high-end functions such as video and voice calls without the need for third-party plugins. 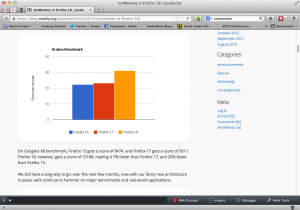 Support for touchscreens on mobile devices has also been improved, with Firefox 18 now implementing support for W3C touch events in place of its own proprietary MozTouch standard.

The update also promises performance improvements when switching tabs, plus better image quality thanks to the implementation of a new HTML scaling algorithm. Developers aren’t quite as well catered for in this release compared to previous builds, although they do get support for the a new DOM property (window.devicePixelRatio) and can enjoy improved startup times through smart handling of signed extension certificates.

Among the fixes includes one notable fix for disabling insecure content on HTTPS pages, plus another that improves responsiveness for users connecting through a proxy. Some known issues remain, however, including one that could prevent future updates from working correctly on Windows machines if people use System Restore shortly after updating Firefox itself.

Also due for release this week is Thunderbird 18, Mozilla’s email messaging tool. Version 18 adds support for zoom controls in the mail compose window, which are controlled via [Cmd] + [Ctrl] + [+]/[-] keyboard shortcuts (these previously altered font size). The update will be rounded off with a significant number of bug fixes.

Firefox 18.0 FINAL is available now as an open-source, free download for Windows, Mac and Linux. Thunderbird 17.0 FINAL is still the current release – keep checking back for version 18, which should appear later this week.