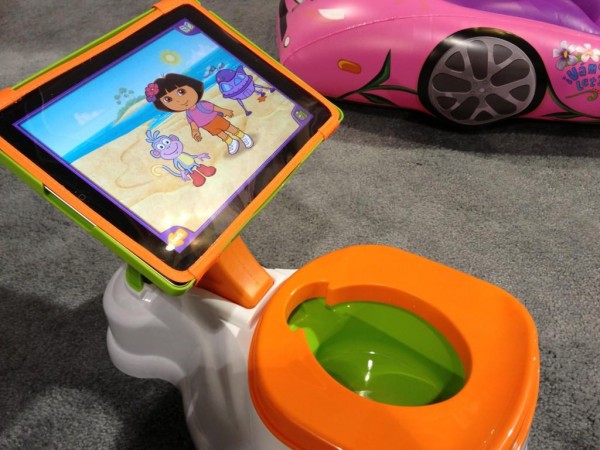 Four days ago I reported about "5 CES 2013 pre-show announcements you should know about". As the show leads towards a (long awaited) finale, let's take a look at the five weird pieces of tech unveiled since Sunday.

Some serve as part of the "What were they thinking?" lesson in announcing new products, while others are good examples of tech gone too far. Since quantifying which one's more out of place than the other, the following five products will be listed in a non-particular order. Feel free to name the weirdest of all in the comments below. Be advised, that's no easy task to undertake!

If you want to teach your child how to use the toilet and you happen to have an Apple iPad lying around, or don't mind buying a new one, then the iPotty for iPad delivered by CTA Digital might be just the thing for your tyke's toilet-duty training.

The portable potty comes with a splash-guard that covers the fruit logo-branded device and one for the potty itself, just in case any youngster decides to test the iPad's water-resistance (which obviously it does not have) or rebels against the proper seating position.

That said, parents are looking at quite an expensive plastic toilet. The iPad 2 starts at $399, while the iPad 4 runs for $499. Don't forget to use the splash-guard before letting the toddler take it for a spin!

Basically designed for those who cannot help but rush a meal, the HAPIfork also allows the user to track down progress by uploading the information via USB to the Online Dashboard. Cool, isn't it? I mean, who doesn't want a bunch of lights on their fork while they're eating and a method to compare grubbing habits?

Likely the company behind the product deems it efficient, although I'd like to know whether it is entirely water-proof. There is no mention, but seeing as it's still a fork and gets dirty, using water is a necessity.

Imagine salesmen say: "Dear Sir (or Madam), may I interest you in an Android-controlled wall oven?" Likely you'd think he or she would be nuts, but thanks to Dacor one of the remotely thinkable ideas has already been put into practice, and will come in stores as the Discovery Wall Oven.

The cooker features an integrated Discovery IQ Controller for Android, "truly a revolutionary wall oven controller that has raised the bar for cooking convenience and performance". The controller also features Wi-Fi connectivity so that the oven can be remotely operated. Neat, isn't it?

Dacor says the Double Wall Oven runs for $7,499 when available during the "Summer of 2013", while the Single Wall Oven goes for a more modest $4,499. For that price buyers do get text messages or push notifications once the "dish is ready to serve". That's like looking inside the oven, but without actually being there to do it.

Likely due to a desperate need for differentiation (how many refrigerators types can there be?), Samsung unveiled the T9000. With an MSRP of $3,999 the T9000 comes with a LCD display and "apps to help families stay organized and connected in the kitchen".

More precisely, the refrigerator features Evernote integration, allegedly to allow buyers to share photos, videos or recipes, as well as calendar and weather apps, among likely other ones. You might wonder: "Why run Evernote on my smartphone and tablet when I can basically do the same thing on a fridge?"

So has Samsung gone too far with the T9000? Technology is further advancing into our lives, indeed, but there has to be some point where there's too much of it. Checking the weather app and digital notes on a fridge surely qualify as such.

Touted as a product designed for the ladies (although it may appeal to some men as well), is Nano Nails. In short the device is basically a stylus (more or less) that looks like a faux finger nail.

It's literally "a stylus that is always at your fingertips" according to Tech Tips, although I can only assume that it's just not as good because of the larger contact surface. The company aims the Nano Nails at women artists wanting to use their phone to draw, adding notes and so on. But wait, isn't there a Samsung Galaxy Note II for that?

Ah, but you see the Nano Nails can work on any phone even the smaller iPhone 5 for instance. Surely success awaits such a glamorous and innovative product, doesn't it? On a more serious note I can only wonder how does it stay glued (likely pun intended) to the finger nail, how easy it can be removed and if the Nano Nails are actually frustrating to take on and off on a daily basis.

These are just five examples of wacky and weird tech product unveiled at CES 2013. If you have other ones that you fancy adding to the list, please use the comments section below.