Samsung surges as US consumers pull back from iPhone 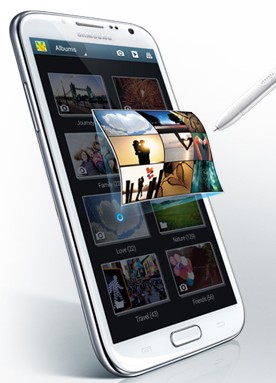 ChangeWave has new data out today showing an expected, but dramatic, decline in iPhone buying intentions over the next 90 days and unexpected jump for Samsung smartphones -- two models particularly: Galaxy S III and Note II. One-half of US consumers say they'll buy Apple's handset, but that's down from 71 percent three months earlier. Interest in the South Korean manufacturer's devices surged to 21 percent from 13 percent during the same time frame.

"Consumer buying intent for Samsung smartphones has been extraordinary to start the year", Paul Carton, ChangeWave's vice president of research, says. "Considering the Galaxy S III has been out for several months we'd normally expect a slowdown by now, but it’s still red hot. We’re also seeing strong interest in Samsung’s large-screen phone -- the Galaxy Note II. Super-sized smartphones are taking the industry by storm in 2013". Among those planning to buy a Samsung smartphone, 69 percent say Galaxy S3 and 23 percent Note II.

ChangeWave sees a dramatic surge in consumer buying interests for phablets, proclaiming the "era of large-screen smartphones is upon us". Among those surveyed, 27 percent want a device with screen 5 inches or larger. Granted most (52 percent) choose 4-to-4.9 inches.

Samsung's lead in the phablet category isn't decisive. "With this level of consumer interest, Apple is perfectly capable of producing a large-screen smart phone that’s virtually a tiny tablet -- they could call it an 'iTab' -- and have it on the shelves for the next Holiday season", Carton says.

Buying surveys are always iffy things, even though I do many polls here. What people say they will do reflects what they want to not what they will. ChangeWave's previous survey is good example. If 71 percent of Americans really bought iPhone over the holidays, most people would have one. Buying intentions would collapse for most smartphones. So surveys like this are more a barometer to gauge buying conditions -- whether clear skies or storms ahead.

Some key takeaways, I see:

ChangeWave has continued good news for Apple and now something for Microsoft, too. Consumers' iOS satisfaction is 71 percent, while only 48 percent for Android. Meanwhile, Windows Phone is 53 percent. If satisfaction counts for anything Google is the loser.

Or is it? Based on the number of devices accessing Google Play in the 14 days before January 3, Jelly Bean accounts for just 10.2 percent of the install base. Even for the majority on older versions, the data doesn't reflect the large number using Android skinned by manufacturers. Given Samsung's dominance, the low satisfaction is more about TouchWiz UI than Android. Not that the difference matters to consumers.